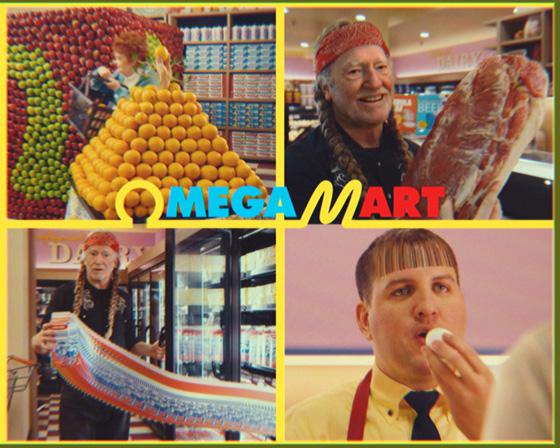 Wieden+Kennedy Portland (W+K) is inserting its quirky creative vision and sense of humor to help raise the profile of Meow Wolf, an underground art collective the agency has been quietly collaborating with in order to transform the group into a well-known location-based experience.

The “Omega Mart” creative makes one feel unhip for not immediately getting the joke. The storyline mimics the grand opening announcements used by grocery stores, and then tweaks this playbook with quirkiness and surreality.

“Spokesperson” Willie Nelson is followed as he pushes his cart and promotes store offerings, all in a vibe resembling "Twin Peaks," with actions that are not what they seem. For instance, at one point, the spry and seemingly more youthful Nelson is revealed to be a deepfake imposter. (Nelson’s team approved his participation.)

OOH will include billboards around Las Vegas and a giant inflatable gorilla, another homage to  mainstream store openings.

While this campaign may confuse some viewers into thinking it is promoting a real store arrival, W+K wanted to capture the unpredictable experiences provided by Meow Wolf.

“These guys are expert storytellers and world builders, so our sole job as their creative partner is to invite as many people as possible to come see what it’s like to have your mind bent,” say Jason Kreher & Matt Sorrell, CD, W+K.

W+K “got deep in the mud” with the group early as they were developing their Vegas experience, and saw “firsthand how they are able to collaborate with so many disparate types of artists, but still maintain a singular artistic voice,” say Sorrell and Kreher. “It was inspiring and frankly changed the way we work here at W+K.”

Omega Mart opens in Las Vegas’ experiential retail and entertainment complex, AREA15, on February 18th. This will be the second permanent installation for Meow Wolf following the House of Eternal Return in Santa Fe, New Mexico.