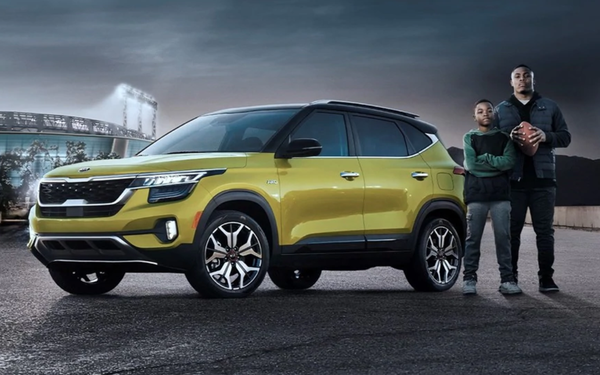 After more than a decade of Super Bowl campaigns, Kia Motors America is taking a pass on Super Bowl LV.

Instead, the brand will expand its charitable endeavors in support of America’s youth, says Russell Wager, vice president, marketing, Kia Motors America. Details of the new initiatives will be revealed Feb. 4.

Kia’s “Accelerate The Good” program began in 2019 when the "Great Unknowns Scholarship" was established to help young people in need get a foothold in higher education. At the onset of the pandemic in 2020, the automaker continued the efforts through two separate $1 million donations to organizations that support America’s homeless youth population.

Last year marked the automaker’s 11th consecutive year advertising in the Super Bowl. For every yard gained during the game, Kia donated $1,000 to three charity partners dedicated to ending youth homelessness. The 60-second “Yards Against Homelessness” spot from David & Goliath aired in the third quarter.

Kia recently announced it was tweaking the name of the automaker’s Korea-based parent company by dropping “Motors” and also unveiled a new brand strategy as well as a new logo.  The American subsidiary based in Irvine, Calif., will continue as Kia Motors America.

The logo was unveiled in a video that already has garnered more than 2.5 million views on YouTube alone. The automaker set a new Guinness World Record for most unmanned aerial vehicles (UAVs) launching fireworks simultaneously.