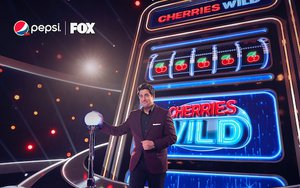 If your users are optimistic gamblers and your brand imaging already evokes slot machines, why not create your own prime-time game show?

That’s what Pepsi Wild Cherry has been working on with Fox.

The result is a 30-minute trivia show called “Cherries Wild” that will debut Feb. 14 preceding “The Simpsons.” It will be a mashup of Pepsi advertising, product placement and viewer participation via a specially designed app and QR codes on packaging.

To negotiate the “Cherries Wild” partnership, Pepsi approached Fox via The Content Collective division of Omnicom Media Group and OMD. The program was created by Wes Kauble (“Supermarket Sweep”) and will be hosted by Jason Biggs, whose credits include “American Pie” and “Outmatched.”

Initially planned for six episodes, the show will feature contestants answering pop culture trivia questions while standing behind podiums that resemble huge beverage cans. At the end of each episode, players will spin the reels on a three-story-tall slot machine emblazoned with Pepsi colors and cherries in the hopes of winning a $250,000 jackpot.

In this interview, Pepsi vice president of marketing Todd Kaplan talks about why this type of gaming experience is expected to appeal to Pepsi Wild Cherry’s younger demographic.

CPG FYI: What’s the genesis of this game show concept?

Kaplan: At a meta level, the concept of advertising or interrupting consumers with your message has a lot of limitations. Fans are going to be seeking out the content that they like, which puts a lot more pressure than ever on brands to develop creative that they want to see and new models to engage with them. We’re trying to find new ways to talk with them—not at them.

CPG FYI: Why do you think a trivia game show will resonate with users of Pepsi Wild Cherry?

Kaplan: What we know is, our Pepsi consumers are optimistic and ready to win: 68% of them believe life is a game they intend to win, 42% think they’re going to be famous some day and that they’re more likely than most people to play the lottery.

The majority of them basically want a go-big-or-go-home kind of approach to their life. When you couple this with the iconography of cherries and slot machines and the opportunity to win big, there’s really something interesting there. That led us to approach Fox with this crazy idea of collaborating.

CPG FYI: So you’re counting on multiscreen use to encourage viewer participation?

Kaplan: We know that 73% of consumers are on their phone while they are watching TV, and 55% of those are actually playing games. We thought it was important to go beyond just being a linear TV show to deliver an all-encompassing, immersive experience that will bring viewers closer to that energy and drama of a prime-time game show like never before.

CPG FYI: How does the mobile app work?

Kaplan: It’s a first of its kind. Fans can play alongside contestants in the actual show. There’s a Cherries Wild moment when five spinning wheels on the app appear at the same time that it’s happening on the television. [App users] can pull their own virtual handle of the slot machine on TV and—if they match exactly what the wheels of the contestants have on the show—they’ll win exactly what’s won on the show.

CPG FYI: Will Pepsi Wild Cherry be the show’s only advertiser?

Kaplan: This is a prime-time show from Fox, and they will be selling advertising for it to other partners. Obviously, we’ll have a good presence throughout.