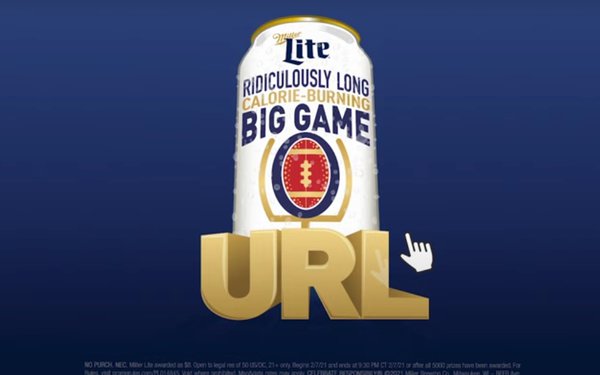 Miller Lite is running a full-page ad in The New York Times Monday morning that challenges drinkers to input a comically long 836-character URL on their computer --  “The Lite Ridiculously Long Calorie-Burning Big Game URL” -- for the chance to win a six-pack.

The beer maker says typing in that super-long URL is “proven to burn the single calorie difference between Miller Lite’s 96 calories and Michelob Ultra’s 95 calories” per can.

And Miller Lite drinkers are “encouraged” to occupy themselves by inputting that URL when Michelob Ultra’s ad airs during the Super Bowl Feb. 7.

Drinkers who are among the first 5,000 to do so on game day will win $8 via Venmo to fund their purchase of a six-pack.

Anheuser-Busch, whose Michelob Ultra is the fastest growing beer brand, has the beer rights to the Super Bowl, so part of the fun for Miller Lite is tweaking its competitor and its claims.

Drinkers know Miller Lite has owned the “more taste/less filling” turf for a few decades. “What better time to remind them that than on the biggest beer drinking day of the year?” Sofia Colucci, vice president of marketing for the Miller brands, asks Marketing Daily. “Beer drinkers respond well when they find out Miller Lite is just one additional calorie, and has more taste. It’s as simple as that.”

Besides the Times, the ad will run in the St. Louis Post-Dispatch, where Michelob Ultra’s parent is headquartered, and the Milwaukee Journal, in the city where Miller Lite is brewed. A video version, with someone reading the URL, also exists on YouTube.

The URL is so very, very long because that way someone into typing it really can’t fake it. It would be hard (though apparently not impossible) to copy and paste the URL into a typical browser.

And continues a little later discussing the length of the URL, “ButYouWillHaveToTypeItForRealNoCheatingByCopyingAndPastingWhichIsWhyWeArePrintingThisURLInAGoodOldFashionedNewspaper”

The run-on URL acknowledges there may be a way to cut and paste, “ButWeAreGoingToTrustYouBecauseGoodRelationshipsAreBuiltOnTrust” and so on, for a few more lines.

The promotion, the handiwork of DDB Chicago and San Francisco, is one of several creative efforts from non-Anheuser-Busch beer makers aiming for visibility during Super Bowl time.

It comes just a few days after Coors unveiled TheBigCommercialOfYourDreams which purports to show a Coors commercial in a dream to sleepers who follow some stimuli, including a video and eight hours of audio stimulation.

Miller Lite has been stoking a little fight with Michelob Ultra. Lately it’s resurrected a commercial from last summer  in which a convenience store customer is reminded by a clerk about Miller Lite’s nearly exact calorie count. The customer reshelves  the case of Ultra he intended to buy.