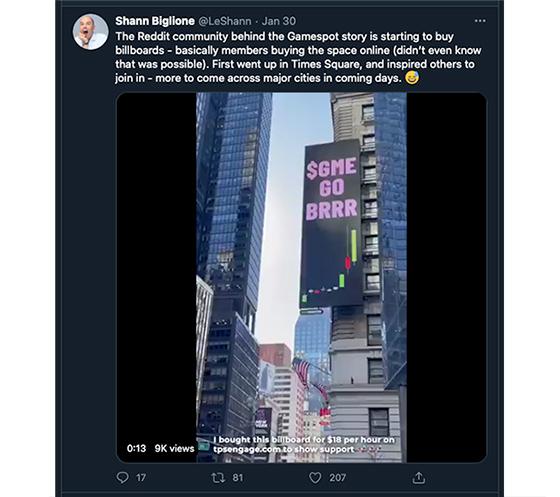 After igniting chaos and mayhem on Wall Street with their GameStop stock purchases, the Reddit community is leveraging technology to spread their message via OOH advertising.

One in Times Square New York Friday appeared with the message, “GME Go Brrr.” This message refers to a popular internet meme that uses “Brrr” to signify the sound a money-printing machine makes while in operation. GME is the GameStop ticker symbol on the New York stock exchange. Another ad appeared in Oklahoma with the message, “We’re Not Leaving $GME.”

The New York Post reported that the digital ad that ran for an hour on the corner of 54th and Broadway was the creation of Matei Psatta, co-founder of a startup digital billboard maker. He told the Post he bought the one-hour placement for $18.

However, Frank O'Brien, Founder of Five Tier, which places media worldwide including Times Square through this micro buy model, applauded the buy but questioned the details.

"The whole GameStop stock movement can be viewed as a blueprint to democratizing large, monolithic industries," O'Brien says. "The fact that this is now generating awareness for different ways to buy and place media is a great spillover and ironic parallel."

O'Brien tells MediaPost that the average per hour cost of a Times Square billboard placement teeters on $25.

While Psatta told the Post he was a supporter of the Reddit/GameStop cause, it appears to be more as much about a savvy marketer who cannily recognized an opportunity to obtain some publicity for his digital OOH startup company TPS Engage.

Regardless of his motives, his decision appears to have sparked others to follow in his path.

This weekend, an airplane flew over Santa Monica with the sign, “We are all GameStop WallStreetBets,” while another plane traveled around San Francisco proclaiming, “Suck my nuts Robinhood.”

Looking forward, this Reddit'er ad campaign seems to be gaining steam, with one marketing strategist tweeting “more to come in major cities in coming days.”