In 'Clarice,' Plucky Profiler Takes On Serial Killers And Sexism 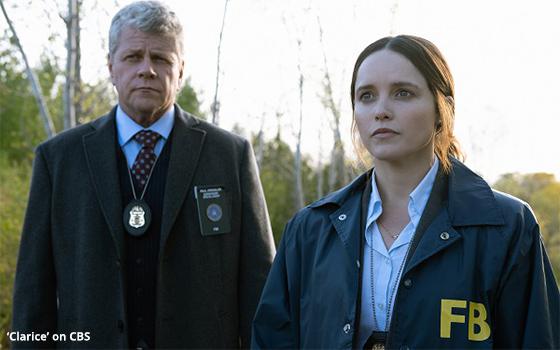 Hannibal Lecter makes no appearance in the premiere episode of “Clarice,” another procedural crime drama on CBS with a focus on serial killers.

The TV Blog has noted CBS’ prime-time fixation with serial killers many times in the past. In that context, it seems inevitable that the network would catch up sooner or later with the “Silence of the Lambs” universe, which can possibly be credited with starting popular culture’s now-endless fascination with those who kill serially.

Based on a novel of the same name by Thomas Harris, the original “Silence of the Lambs” movie released in 1991 had a huge impact on serial-killer cinema.

Jodie Foster famously played the FBI profiler-in-training Clarice Starling who helps locate and apprehend a serial killer based at least partly on guidance she receives from an imprisoned serial killer and psychiatrist Hannibal Lecter, played even more famously by Anthony Hopkins.

The TV shows and movies that this movie influenced are much too numerous to catalogue, much less mention in a TV Blog, but at least one current show does come to mind -- the serial killer drama on Fox called “Prodigal Son” in which an investigator receives assistance on serial-killer cases from his own brilliant but demented father who is an imprisoned serial killer.

The new CBS series “Clarice,” premiering Thursday and ballyhooed with numerous promo spots during the Super Bowl Sunday night, takes place in the mid-1990s (roughly in the vicinity of Washington, D.C.) shortly after the time frame of the “Silence of the Lambs” movie.

In the TV show, the young agent Clarice (played here by Rebecca Breeds, above photo right) is still contending with FBI veterans and higher-ups -- all male, naturally -- who resent the way she almost singlehandedly solved the serial murders at the center of the “Silence of the Lambs” story.

These storylines always appear vexing to me. I mean, here is a person who closed a case in which a serial killer would have almost certainly just continued to murder people (in this case, an array of young women).

And yet, all of Agent Starling’s fellow FBI agents resent that this wide-eyed rookie solved this mystery and in the process, likely saved the lives of an untold number of potential victims who would have eventually been tortured and killed by this guy.

This scenario never rings true to me, and very likely is not something that occurs as readily in the real world of the FBI as this TV show would have you believe.

On the other hand, like anywhere else, it is also possible to believe that sexism existed in the male-dominated FBI. For the record, the bureau’s gender barrier was broken at least as far back as 1972, when female agents began to populate the agency, according to a cursory Google search.

Oh, well. TV dramas very rarely jibe completely with reality. And it is also possible to suspend one’s skepticism and enjoy “Clarice” (as much as one can actually “enjoy” stories every week about egregious serial killings).

As the “Clarice” story opens, another serial-killer investigation is afoot, and Clarice is asked by no less a personage than the attorney general of the United States (also a woman) to join a special task force charged with these kinds of investigations.

Predictably, the plucky profiler -- who wants nothing more than respect and the freedom to do her job -- gets pushback from men such as the head of her unit played by Michael Cudlitz (pictured with her above).

Will this strong-willed young woman be able to thrive in the face of all of this male chauvinism? You betcha! Why? Because if she did not succeed in this new unit, there would be no show.

Perhaps some time later in this show’s first season, the men in Clarice’s professional life will begin to appreciate her ability to halt the progress of serial killers before they kill again, without resenting her for doing this obviously valuable work.

Besides, as in all the other CBS serial-killer dramas, the region in which these agents work is evidently awash in serial killers. With one or more of these fiends leaving corpses around and coming to the attention of the FBI each week, there ought to be plenty of serial-killer work to go around for everybody.