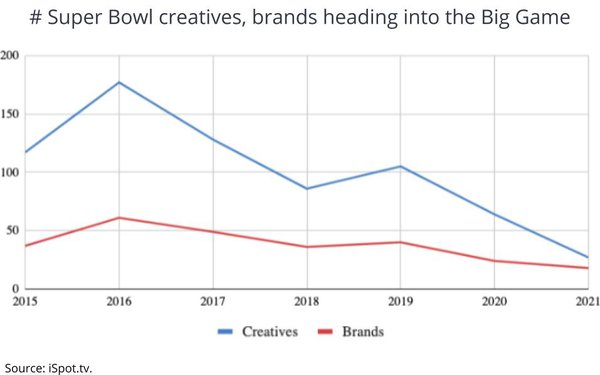 Just a week or so before the Super Bowl game, there is a sharp 73% decline in online releases of new Super Bowl commercials or teasers of those commercials versus a year ago.

As of Sunday evening/Monday morning (January 31/February 1), there were 48 pieces of Super Bowl creative from 25 brands yielding a total of 19.8 million online views from all platforms, per data from iSpot.tv.

A year ago at this time, there were 182 creative pieces from 50 brands producing 46.4 million online views.

From 2015 through 2020, there have been an average of 171 creative online releases each year coming from an average of 49 brands, yielding an average 95 million online views. The best year was in 2016, with 246 creatives and 64 brands, tallying collective 226.9 million views.

This lower pre-Super Bowl activity is largely due to the COVID-19 pandemic, a weakened economy, and an uncertain TV advertising marketplace.

CBS, which will be airing the big event this Sunday February, only recently has been able to sell out its TV advertising in the big game.

In 2019, Fox sold out its Super Bowl advertising inventory by Thanksgiving for the February 2020 game.

Major long-time Super Bowl advertisers -- such as Budweiser, Pepsi, Coke, and Ford Motor -- are sitting out the big game this year.

Some potential Super Bowl advertisers are on the sidelines, according to analysts, partly due to uncertainty over what messaging should be aired amid heightened intensity in the political climate after the Presidential election, the pandemic, and a still struggling economy. 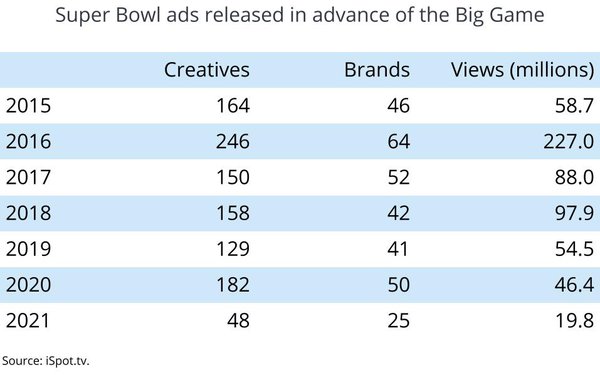