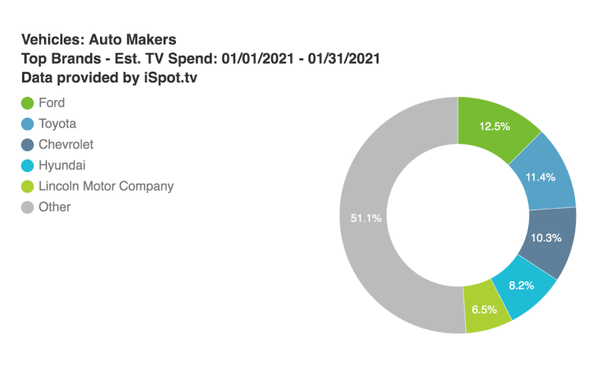 The year vs. year comparison was up 27.6% vs. January 2020, but impressions were down slightly, compared with a 1.32% decrease year over year, according to iSpot.tv.

NFL games were a large portion of automaker spend during the month. Between the end of the regular season and the first three rounds of the playoffs, NFL action made up 45.7% of automaker TV ad spend in January.

College football also took in another 6.96% of spend, while college basketball (3.02%) and NBA games rounded out the top shows. Sports also made up nearly 42% of all auto brand TV ad impressions during the month.

Over the course of January, five different auto brand spots were seen at least 700 million times. With 1.06 billion, Lincoln’s “Comfort in the Extreme: Cold”  had the most TV ad impressions.

General Motors’ Chervolet brand, which had the most-seen auto ad for the last two months, was second with its “Last Thing” Silverado spot (941 million impressions), and was also fifth on the list with “Just Better” (777 million impressions) which debuted back in September.

With big audiences tuning in for NFL games, auto brands were eager to push 2021 vehicle inventory, which showed in terms of ad spend. Of the top 20 automakers in January, 17 increased spend compared to January 2020.

"Automakers were busy pushing 2021 inventory this January, largely returning to 'business-as-usual' sales creative while trying to move new inventory," said Stu Schwartzapfel, senior vice president, media partnerships at iSpot.tv. "After months of auto brands hanging back in the early days of the pandemic, we've seen live sports drive TV ad impressions for autos since the fall -- something that became even more pronounced during the NFL Playoffs."