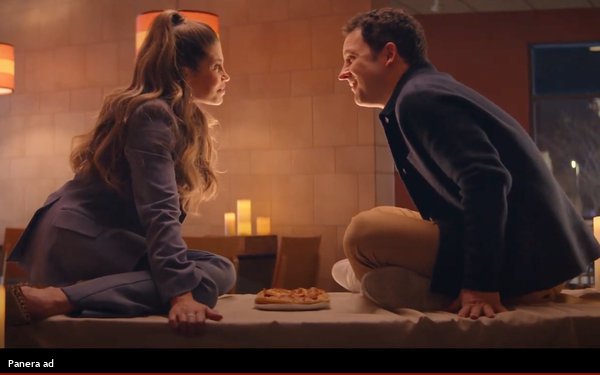 If sharing cheesecake and pizza can’t help unite people during an unusually stressful Valentine holiday, what can?

Meanwhile, Panera Bread is reaching back to 1990s nostalgia to reunite “Boy Meets World” stars Ben Savage and Danielle Fishel, who meet unexpectedly in a restaurant and bond over pepperoni flatbread pizza.

The campaign for Philadelphia’s Cheesecake Crumble—tiny, ready-to-eat cheesecake and crust in a cup—is based on a survey the company says indicates that 53% of couples say they have argued over sharing the last bite of dessert.

In a 60-second spot from the GUT Agency, a couples therapist tries to mediate a dispute between Iaconetti and Haibon.

“You both want that last bite, and somebody has to take it. But you’re both prepared to judge whoever does,” the therapist explains.

When a defiant Haibon eats it, Iaconetti says “You’re unbelievable” before stalking away.

The therapist’s suggestion to viewers is to try “a personal serving of Cheesecake Crumble” and visit a dedicated website where Philadelphia is offering select participants $150 to help pay for couples’ therapy.

The brand chose Iaconetti and Haibon because they are “a real-life, recognizable couple that has had their fair share of relatable disputes on TV,” Nicole Kulwicki, general manager, easy indulgent desserts at Kraft Heinz, tells Marketing Daily.

According to Panera, nearly 70% of Americans would be happy to receive comfort food instead of flowers this Valentine’s Day, and nearly 60% say they’d prefer it over a fancy meal.

The chain’s solution is conveyed in a spot from Goodby Silverstein & Partners called “Forever Flatbreads.” It reunites the Cory and Topanga characters from “Boy Meets World”—although not without some friction over, yes, sharing.

At their chance encounter at a Panera, each discovers the other has ordered a pepperoni flatbread pizza. When they sit down to share one, Cory helps himself to the last slice.

“I wanted you to want me to want it,” Topanga fumes before walking off in a huff.

The spot ends with the duo sitting on a restaurant table coming to terms with the dispute while leaning toward each other for a possible kiss.

“Ben and Danielle are an iconic couple and were the perfect fit for this campaign,” says a Panera rep. “Their fictional love story brings feelings of nostalgia and excitement, which we know consumers are looking for this Valentine’s Day.”