The Rock For President? By 2032, It Just Might Happen 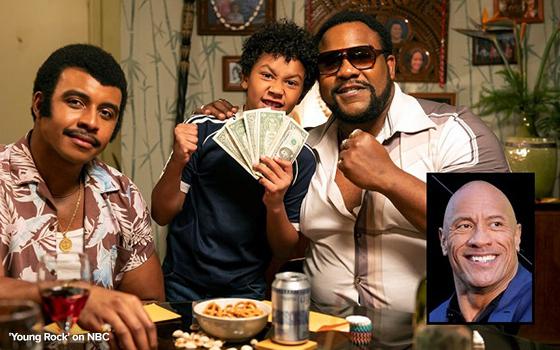 Here is a prediction: The brawny wrestling and movie star Dwayne “The Rock” Johnson will become so popular (even more than he is today) that by 2032, he will run for president of the United States.

OK, I admit I did not think of this scenario. Someone else did -- possibly The Rock himself, for it forms the basis for a new sitcom that premieres next week on NBC.

Titled “Young Rock,” the show purports to be all about The Rock’s early life. Most likely these tales have been embellished, if not outright fictionalized, in order to make a proper sitcom out of them.

The set-up is this: The show’s premiere episode opens in the year 2032, a presidential election year, and The Rock has apparently just been nominated as one of the two candidates. His party is not specified in the pilot, and neither is his opponent.

The pilot has The Rock being interviewed for what appears to be a national TV network.

In the interview, The Rock is seen telling the story of his early life -- as a little boy, a high school teen and then a football star at the University of Miami.

This figures to be a lengthy interview because in Episode One, The Rock is just getting started. If the show’s subsequent episodes are anything like the premiere, The Rock’s telling of his life story will presumably take all season to tell.

It is easy to call this premise into question. Among other things, The Rock will be 60 years old in 2032, and he certainly does not look 60 in this show. But on the other hand, the show itself is easy enough to take, and even enjoy.

Those who wish to find out the true story of The Rock and his family are welcome to consult Wikipedia. The TV Blog assumes, however, that the story being told in this TV show is somewhat similar to the real story -- at least in the broadest of strokes.

For example, until I watched this premiere episode earlier this week, I never knew that Dwayne Johnson, who first gained fame as a star of TV wrestling, grew up in a wrestling family.

His father was Rocky “Soulman” Johnson, a name that might be familiar to those old enough to have known the names of many of the more colorful pro wrestlers of the 1970s.

In the premiere episode of “Young Rock,” a number of them are on hand socializing with The Rock’s father as the young Dwayne (played by Adrian Groulx) absorbs their teachings about how to make it in the wrestling game.

Featured in the above photo, The Rock’s father is played by Joseph Lee Anderson (left). He and young Rock are joined in the picture by the wrestler known as “Junkyard Dog” (played here by Nate Jackson). Also seen in the show: Actors playing the Iron Sheik and, best of all, Andre the Giant.

How this origin story will figure into The Rock’s 2032 run for the White House is anybody’s guess.

Whatever happens in this TV show, it nevertheless has whetted the TV Blog’s appetite for the 2032 presidential race and the tantalizing possibility that we might come out of it with a new President Johnson.