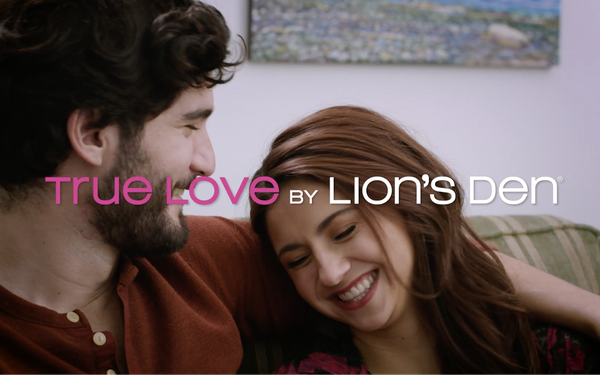 Agencies are helping brands capture that romantic spirit with Valentine’s Day inspired campaigns. One notable trend this year is the inclusion of real-life couples.

1-800-FLOWERS.COM is cleverly appealing to a broader range of customers by declaring #NoLimitsOnLove to celebrate love in many forms, including parent-child and friend-to-friend.

This integrated campaign— which incorporates a dedicated site, social, digital, email, banners, video — is one that uses love stories of real couples to encourage others to order boutiques and gifts. Raj and Brittany, for example, discuss their Zoom wedding. The online videos were developed with creative agency Filmcraft.

A virtual event held on Feb. 11 featured two well-known couples, including "Married at First Sight"'s Jaime Otis and Doug Hehner, as they shared their respective love stories. Others are encouraged to submit their romantic moments using the #NoLimitsOnLove hashtag.

This is the first time Lion’s Den is widening the age range featured in its creative to include a boomer-aged couple, Erik and Deborah, since this demographic is not typically associated with sex toy purchases. In reality, a recent study published on AARP, indicates 60% of women and 40% of men over the age of 50 use sex toys individually, or as a couple.

Pandora jewelry’s campaign seeks to capture how real-life couples and friends share their own acts of love, including one couple who each planned one half of a day to recognize their significant other. Agency Mailing spearheaded the films, which are directed by Dan Martensen who also serves as photographer for the campaign’s still images.

Molson Coors and agency Mono are supporting the brand’s MOVO Wine Spritzers by rewarding people with wine if they text MOVO instead of someone regrettable just because they’re feeling lonely around this romantic month.

Anyone of legal drinking age who resides in an eligible state is invited to text “U UP?” to 73255 to receive a rebate for their $13 wine purchase. Purchases must occur before February 28 and receipts must be submitted before March 7. Drinkers are encouraged to share how they enjoy the new wine spritzers at home, by using #MOVOWine.

Noosa yoghurt is partnering with social media personality Matty Benedetto, whose Unnecessary Inventions platform introduces new products that “solve nonexistent problems” like a desk that flips from a bed to work mode. Although dairy products may seem like an odd fit for a Valentine’s Day-themed campaign, the creative playfully highlights how noosa is bringing the “passion(fruit) back.”

Noosa, in partnership with lead agency Butler, Shine, Stern & Partners (BSSP) and Benedetto are introducing the “Yoguzzi,” a floating tube to keep the yogurt cool while the eater sits in a jacuzzi or bathtub. This is the first time Benedetto is working with a brand to create a bespoke collection.

In addition to several “teaser” videos that built up the product’s reveal, fans have the chance to enter to win their very own “Yoguzzi” gadget, along with other swag and a tub of limited-edition Passion Fruit noosa.

Safe in Harm’s Way (SIHW) is joining up with the Out of Home Advertising Association (OAAA) and DDI MEDIA to raise awareness about domestic violence. Starting on Feb. 14, OAAA members will feature SIHW messaging across their respective media channels.

Timing this PSA around Valentine’s Day is aimed at encouraging others to think differently about domestic violence while otherwise occupied with romantic intentions. In addition, this messaging is designed to target the more isolated victims of this abuse via OOH media.

“Abusive relationships never start out as being abusive, they begin just like any other relationship would. They start with candy and flowers,” said Caroline Hammond, founder, SIHW. “Here, we’re not only looking after the battered woman, but we’re also bringing awareness to the other forms of domestic abuse that aren’t talked about, such as emotional or financial abuse. Once people can recognize and label abuse, based on these feelings, then action can be taken to move from victim to survivor."

The OOH messaging speaks directly to victims by suggesting “we are here” and directing them to the nonprofit’s social media channels at @SafeInHarmsWay. SIHW’s online platform includes a database of public conviction records and local shelters, empowering stories from survivors and corporate education seminars.

SIHW will debut additional OOH designs throughout the year to further help those in abusive relationships.