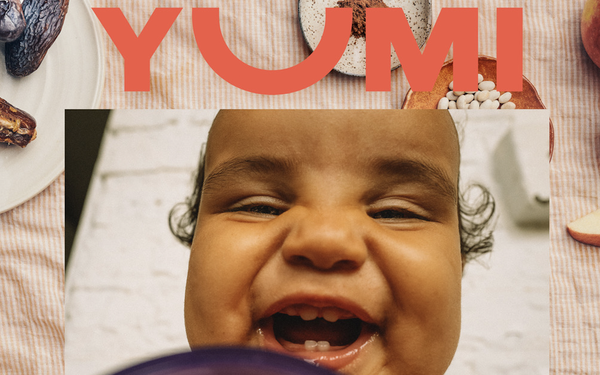 While the D2C universe may be crowded with healthy food options for people -- and dogs -- it's neglected babies. Yumi, an organic baby food company launched in 2017, wants to change that. We asked Evelyn Rusli, co-founder, president and CMO, to explain why young parents are ready to rethink baby food.

D2C FYI: First, tell us a little about how Yumi came to be. How did you move from journalism [as a reporter at, most recently, the Wall Street Journal] to baby food?

Evelyn Rusli: Angela Sutherland, Yumi's CEO, and I have been friends for years. We're sort of the opposites of one another's brains. I was an English major, she was a math major. I worked in journalism, she worked in finance.

When she became pregnant with her first child, she went down the same rabbit hole that so many new millennial parents do, reading all these clinical studies about nutrition. She became aware of how important the first thousand days are to neural development.

We were both pretty astounded. We realized there was this significant information gap about specific nutrients, neurological development to physical development, and metabolic health. And like many people, we now realize how broken the food system is.

D2C FYI: There's been some big news about arsenic and other toxic metals in big-name brands recently, including Gerber.

Rusli: Yes. And just as there's been an awakening for the impact of processed and high-sugar foods on adults, parents realize that, too. Angela was just walking around the grocery store reading labels -- and many baby foods are so high in fructose and largely made of applesauce. Many have a shelf life of two years. Who wants to feed a baby food that's older than the baby?

D2C FYI: What makes you think baby food is a good category for a D2C brand?

Rusli: We realized it was more than just about giving a parent a meal or snack for their kid. It was about connecting the dots between nutrition and development and supporting the family as a whole. We realized there was a lot of power in this D2C model, to be in their home every week -- it's very intimate.

We don't just provide a product, but also content and context. Every week, there's a customized plan based on the child's age and experience.

For example, we know that at six months, their iron stores are depleted, so we send foods rich in iron.

D2C FYI: How is D2C different from retail?

Rusli: Retail is powerful, of course. And you can be in thousands of stores. But the relationship is kind of one-dimensional and limited. There's not as much opportunity to educate and inform.

D2C FYI: Will you try and move into retail, as so many other D2C brands have?

Rusli: So many D2C brands are omnichannel now. And as we think about our business's maturation, we want to be where our families are, and we create many different touchpoints.

D2C FYI: Who is your core customer?

Rusli: Usually a millennial parent, raised with technology. They're less likely to ask their parents what to do about child-rearing, and more likely to Google it.

D2C FYI: Does the declining birth rate, both among millennials in general and especially because of the pandemic, worry you?

Rusli: No. No matter how many babies are born in a given year, more parents are excited about better-for-you options. Parents have never been busier, so they're looking for alternatives they feel good about.

D2C FYI: You've just launched your first ad campaign. How did it come about?

Rusli: It's called "This Is Now," and it celebrates what we see as a seismic shift in parenting. Our generation sees it differently -- especially because of the pandemic.

So we sent Leica cameras to families and gave them vague directives: "Show us a happy moment," or "What does mealtime look like?"

It was right when people started talking about how stressful the pandemic was, and we were so surprised to see so much footage of resilience and strength. Parents are finding a lot of beauty in spending time at home with their kids.

We are very keen to push forward the standard of what baby food and kids' food is, and to celebrate these parents and their stories.

D2C FYI: Many D2C brands aspire to cashing out via acquisition. Is that your plan?

Rusli: We're excited about the mission of reaching more families. And yes, in some scenarios, people find corporate partners, and that works for them.

But there are also many companies, especially in the better-for-you food category, that are carving their own path. Look at Oatly, on the precipice of its IPO, or Beyond Meat or Vital Farms. There are lots of paths. It doesn't just have to be Door No. 1.