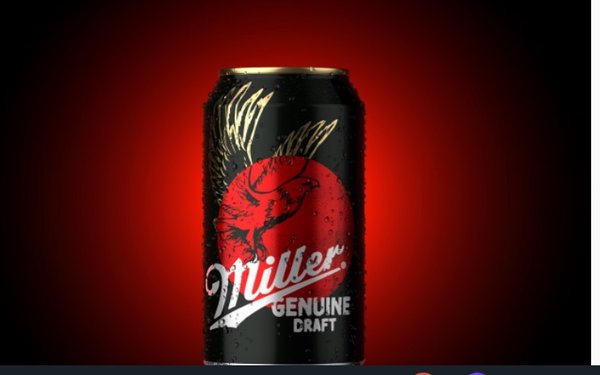 Miller Genuine Draft Beer, a big hit when it debuted in 1986, is radically revising its label, adopting a black can and bottle label punctuated with a big red dot and an oversized eagle.

The beer itself isn’t changing and the change does not seem to be getting any new advertising support, but it’s a showy refresh.

“Miller Genuine Draft is a large brand in Molson Coors’ U.S. portfolio, and we wanted to breathe some new life into it, re-engage with our core drinkers, and set the brand up for future success,” said Anne Pando, MGD’s senior marketing manager, on the Molson Coors blog that revealed the new label.

On the new label, the black motif and the graphics look edgier, more akin to other drinks aimed at younger consumers.

Brand campaigns come and go in the beer business, but it’s as if past marketers just gave up on Genuine Draft, which was quite popular when it was introduced. Miller hyped its “cold-filtered” brewing process that Miller said made it akin to draft beer in a can or bottle. Except for the brewing process, the recipe and ingredients are identical to Miller High Life.

The brand now has a market share of less than 1%, and it’s not been a high-flyer for quite a while. In 2016, its parent company closed the original Eden, North Carolina brewery where it was made and moved production to an existing Miller plant in Virginia.

Traditional beer companies  usually don’t mess with their brand insignias very much. But Miller Genuine Draft tweaked its label as recently as July 2020, when strategic design and innovation agency Seymourpowell streamlined the then-existing label, with an eye toward appealing to younger drinkers.

On the blog, Pando says the newest look resonated with test audiences; in fact, purchase intent was 50% higher than current packaging with existing MGD drinkers. She also said Molson Coors was encouraged by consumer reaction to the recent redesign of the cans for Miller64, a super low-calorie beer the company first debuted in 2008.