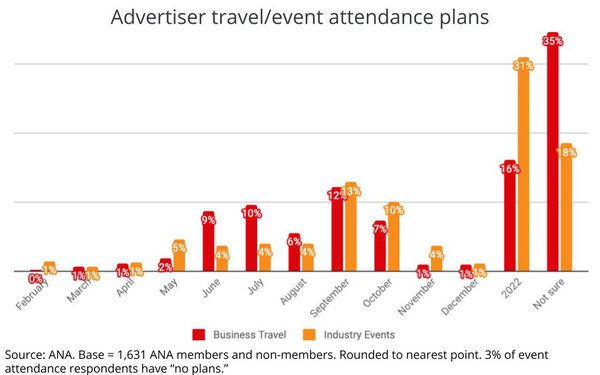 Even as ad agencies consider plans for returning to life as “normal,” including business travel to clients and in-person industry events, most big advertisers plan to stay close to home for the foreseeable future, according to findings of a new study released this morning by the Association of National Advertisers.

Three-quarters (76%) of respondents said their companies currently do not allow business travel for their executives, and only a fraction (2.5%) said they would be willing to travel domestically by air for a business trip.

The survey, which was fielded January 18-29 among ANA members and non-members, generated 1,631 responses and overall found that ad industry business travel is not likely to pick up until mid-2021 at the earliest.

The survey found that about half of all respondents either don't know when they will attend, or do not plan to travel or attend, in-person industry events until at least 2022 (see chart above).

"The good news is that most companies are anticipating an uptick in travel later this year, and that number increases gradually into the fall months," ANA CEO Bob Liodice stated about the survey's findings, adding: "We might not reach pre-COVID levels, but the signs are positive that we’re heading in the right direction.”

The ANA said it plans to field a follow-up survey in May, after a significant number of people have received vaccinations for COVID-19.
advertising, agency, covid-19, travel
Next story loading