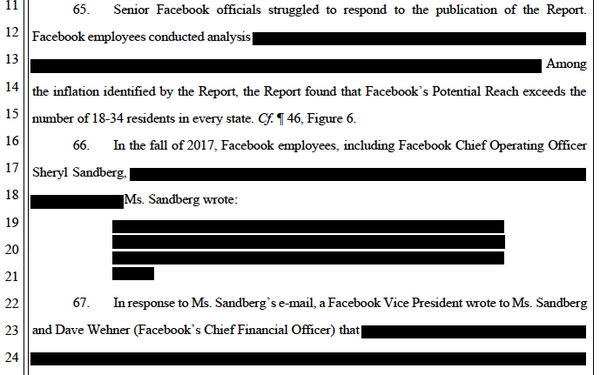 In the fall of 2017, Facebook Chief Operating Officer Sheryl Sandberg allegedly “acknowledged in an internal email” that she was aware of problems with the company's metrics regarding the potential reach of ad campaigns.

The following year, a different executive -- Facebook's Potential Reach Product Manager -- proposed a revision to the metric, but others at the company turned down the proposal because they thought it would have a “significant” impact on revenue, according to court papers.

The executive allegedly responded: “It’s revenue we should have never made given the fact it’s based on wrong data.”

The specifics of those emails were disclosed Wednesday in a newly unsealed court filing in a lawsuit brought by marketers who say Facebook overestimated the potential reach of ad campaigns.

The dispute dates to August of 2018, when Facebook was sued for allegedly inducing advertisers to purchase ads and pay higher prices for them by inflating the number of users the ads could reach.

The current lead plaintiff is Colorado-based e-commerce store operator DZ Reserve, which alleges that it purchased ads on Facebook for around $1 million between December 2017 and December 2018.

The original complaint's allegations of reach inflation were based on reports by outside groups, including the industry organization Video Advertising Bureau, as well as a survey commissioned by the plaintiffs.

The Video Advertising Bureau reported in 2017 that Facebook's estimates of audience reach in every U.S. state were higher than the states' populations, according to the U.S. Census Bureau.

In March 2020, the advertisers amended their complaint to allege that Facebook employees were aware of complaints about the potential reach metric since September of 2015, but failed to respond appropriately. That amended complaint referenced internal company emails, including one by Sandberg, but the contents of those emails were largely blacked out.

Facebook sought to dismiss the lawsuit for numerous reasons, including that advertisers only charged based on the number of clicks on their ads, or ad impressions, but not estimates about reach.

DZ Reserve countered in papers filed in June with U.S. District Court Judge James Donato in the Northern District of California that the information about reach was “an important factor” in their decision to purchase ads.

Those papers -- like the amended complaint -- referenced internal Facebook emails, but the specifics were blacked out. On Wednesday, DZ Reserve filed a version of its complaint without the redactions.

A Facebook spokesperson said the documents referred to in DZ Reserve's papers were “cherry-picked to fit the plaintiff’s narrative.”

The spokesperson added: “‘Potential reach’ is a helpful campaign planning tool that advertisers are never billed on. It’s an estimate and we make clear how it's calculated in our ads interface and Help Center.”

In 2019, Facebook revised the way it calculates potential reach.

Facebook previously agreed to pay $40 million to settle a separate class-action complaint accusing the company of inflating video metrics by up to 900%.