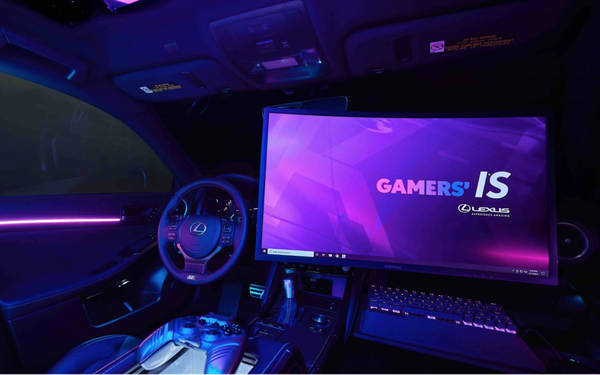 Lexus has designed a one-off vehicle with gamers in mind.

The Lexus + Twitch Gamers’ IS is the first vehicle designed by and for the Twitch community as the ultimate gaming space, according to the luxury automaker.

More than half a million Twitch viewers tuned in to the Jan. 13 livestream hosted by  streamer Fuslie to watch and weigh in.

They voted on modifications ranging from the gaming-themed exterior wrap to the custom controller to their “game fuel” beverage of choice -- coffee drinks.

Lexus then worked with the fabrication experts at SCPS to bring the custom, crowdsourced car to life as a totally immersive gaming vehicle. A custom-built gaming PC is installed in the vehicle’s trunk.

With the IS campaign, Lexus is targeting its youngest, most diverse customer yet, says Vinay Shahani, vice president of Lexus marketing.

“We’re looking to connect with them as they immerse themselves in their passions,” Shahani tells Marketing Daily. “Gaming happens to be one of the most popular interests for this audience.”

Twitch, a live-streaming entertainment service, has given marketers a way to reach a new audience. Last Fall, Honda used Twitch to reveal its new Civic. Honda Head2Head was the first automotive branded gaming channel on Twitch.

“Twitch’s live, interactive video service allows anyone to play a role in creating the moment,” he says. “This partnership takes that engagement to the next level, and we were really pleased with the results.”

For the IS launch, Lexus also is working with a variety of media partners to create content celebrating those who go “all in,” Shahani says.

The automaker partnered with MotorTrend to feature a race between downhill skateboarder Josh Neuman and race car driver Rhys Millen. Lexus also is creating a documentary-style campaign with CNN featuring travel expert Jessica Nabongo on her quest to become the first black woman to visit every state in the U.S. The brand also leveraged Yahoo Fantasy Football players’ stats to serve custom banner ads to fans.