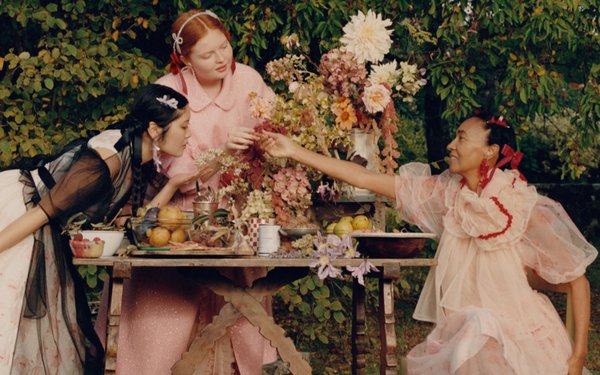 H&M routinely introduces capsule collections in partnership with well-known designers, but ads and images for the new Simone Rocha line have fans daydreaming about escaping into English country gardens.

The Irish designer, favored by the likes of Michelle Obama and Kate Middleton, pulled together a diverse cast of famous faces for the campaign. Wearing clothes that look like they've come from a richly embroidered past, the group is filmed picnicking at the historic Great Dixter house and gardens in Northiam, East Sussex, England.

Tyler Mitchell, the Brooklyn-based photographer who has photographed Vice President Kamala Harris and Beyoncé for the cover of Vogue, filmed the campaign.

The Swedish-based fast-fashion chain, which has struggled as consumers cut back on apparel spending, says it believes the pastoral beauty of the campaign is just what the mask-weary fashion world needs right now.

"Simone Rocha is the perfect designer to offer this collection in this moment," says H&M's Ann-Sofie Johansson in the announcement. "Simone understands the power of clothing for dreaming but creates collections that feel very down-to-earth, very aware of the realities of people's lives. I hope this collection and campaign will offer a moment's escapism, but also conjure happy memories, and a sense of hope for when we can all be close again."

Vogue, which says the collection draws from 10 years of the young designer's archives, kvells about the looks, offering a rare (and affordable) shot at buying past hits, including signature bow-trimmed sleeves and pearl-studded collars.

The elaborate pieces are far pricier than H&M's standard offers, including a $249 puff-sleeved trenchcoat and $349 pearl-studded leather shoes. They also include the designer's first-ever children's collection.

Apparel retailers continue to be among the most impacted by COVID-19. In its most recent results, the H&M Group says fourth-quarter sales dropped 10% in local currencies and 18% for the full year.