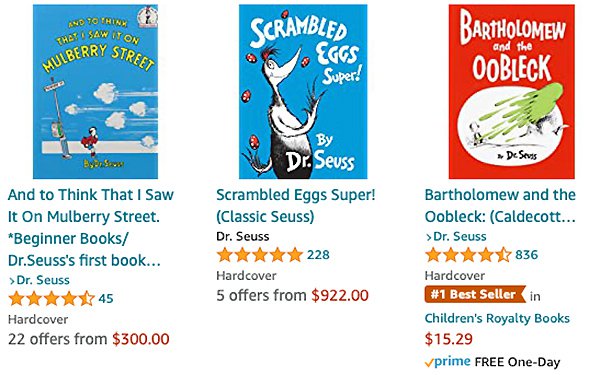 Demand for six Dr. Seuss books skyrocketed across online marketplaces this week after the publisher that prints them said it would halt publishing based on racist and insensitive imagery.

Soon after the books were discontinued, it appears, collectors and resellers took to the internet to search for new copies. The searches sent the price of individual copies skyrocketing.

Google Trends shows that on March 2, searches on its engine for And to Think That I Saw It on Mulberry Street peaked. Interest was strongest in California and New York.

Some of the related search topics included “Dr. Seuss – American author,” “Book – Topics,” “If I Ran the Zoo – Book by Dr. Seuss,” and “Racism – Political ideology.”

One copy of On Beyond Zebra! sold for $250 and $350 on eBay by Wednesday, reported one news outlet. Meanwhile, And to Think That I Saw It on Mulberry Street sold for as much as $510.

On Amazon, the price for one hardcopy of the books skyrocketed, too, in English and Spanish. If I Ran The Zoo in English skyrocketed to $795.85, and And to Think That I Saw It on Mulberry Street jumped to $799.99.

Evidently, online marketplaces have a variety of reasons why they remove a book from sale on their platform. In February, a group of Republican senators is asking Amazon why it recently removed a book about transgender issues that had been on sale on the platform for about three years.

Amazon, they wrote, has been “unable to provide a sufficient explanation” as to how the book “supposedly violated a vague, undefined ‘offensive content’ standard,” reported the WSJ.

Barnes & Noble also will continue to sell them, but a quick search on the bookseller’s website show they are sold out.