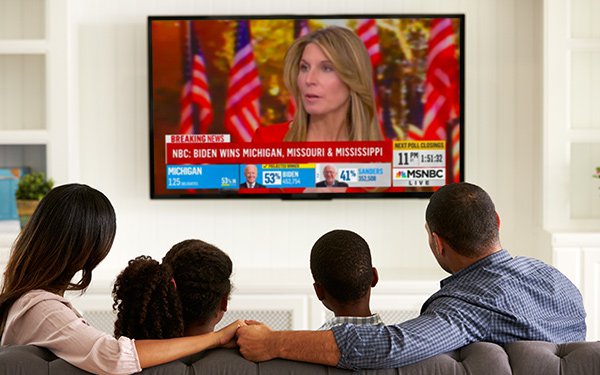 Comcast Corp. cable TV homes -- some 17 million households in 65 markets -- show live TV viewing in the second half of 2020 gained 25%. This increase was largely attributable to cable TV news networks, due to the election year.

Results from Comcast’s Effectv ad sales unit show overall live TV viewing accounted for 89% of daily viewership in the second half of 2020 -- up from 87% in 2019.

Authors of the report say “a historic election cycle and evolving global health crisis, can be attributed to fueling the increase in live cable TV viewing.”

In the fourth quarter of 2020, average viewing per day was five hours/49 minutes versus five hours/39 minutes in the year-earlier period. In the third quarter, cable TV viewing witnessed its highest share of time spent -- as 71% of all time was with cable TV.

In addition to news content, the report says there was an increase in entertainment and sports viewing.

Due to the COVID-19 pandemic -- and a rescheduling of sports TV programming -- the fourth-quarter 2020 witness multiple large sports TV franchises, such as NFL, NBA and others, airing at the same time.

The report says video-on-demand content/DVR time declined by 10 minutes in the fourth quarter to 42 minutes from the same period in the previous year. During the second half of the year, there was an average of 40 VOD titles watched by households.