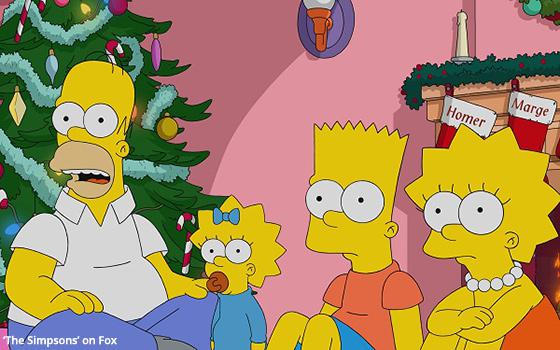 A “Simpsons” Christmas episode airing in late March sums up all we need to know about our topsy-turvy TV world and how the production pipeline has been impacted by the year-long COVID-19 pandemic.

No explanation is offered in the press material from Fox’s publicity department for why this weekend’s episode of “The Simpsons” is airing now (Sunday night at 8 p.m. Eastern) instead of late last year some time between Thanksgiving and Christmas.

Despite its airdate two weeks shy of Easter, the show is definitely not pegged to that holiday. Titled “Manger Things,” it has more to do with the birth of Christ (however vaguely) than his crucifixion and resurrection.

A press advisory, with a link to the episode, arrived earlier this week from Fox publicity touting the show because it is the series’ 700th episode. That is certainly a milestone worth promoting.

But why is this obvious Christmas show airing now? It could have something to do with the way TV and movie production got placed on hold for a number of months last year as the world learned how to cope with the outbreak of COVID.

On the other hand, an animated series such as “The Simpsons” would seem to pose fewer challenges than productions in which a hundred people -- cast and crew -- were required to work closely together in studios on or on-location for all other shows.

Or maybe this “Simpsons’ Christmas wasn’t held up at all by COVID and its restrictions. Perhaps someone at Fox simply thought it would be OK to air a Christmas episode on the second day of spring. Maybe that’s another symptom of our COVID-rattled world; some people have just given up.

Having said all that, the episode is still up to the standards that millions of “Simpsons” fans have come to expect from this remarkable show.

The episode opens with the Simpsons decorating their Christmas tree on Christmas Eve when an unusual tree ornament spurs Marge to tell the family a story about a past Christmas six years earlier.

The story involves the Simpsons’ next-door neighbor, Ned Flanders, and his family -- including his wife Maude, although she died on the show 21 years ago.

But a world created out of thin air by illustrators and animators is nothing if not flexible. And if the writers and producers of “The Simpsons” need Maude Flanders to be alive just six years ago, then that’s OK.

Perhaps we can consider this “Simpsons” Christmas episode airing close to Easter as just another TV oddity, or a late Christmas present.