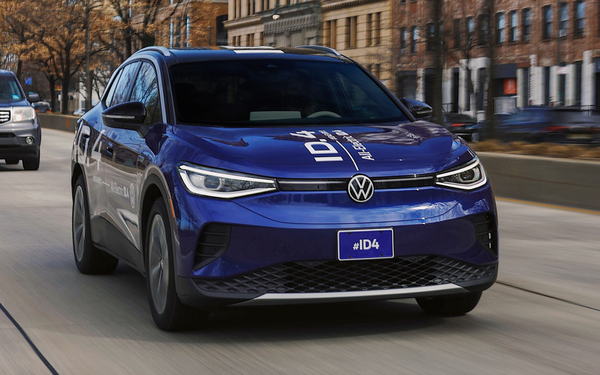 At least that's the aim of Volkswagen of America, which kicked off a nearly 6,000-mile trip in NYC on Saturday in a Volkswagen ID.4 EV.

A small team is crossing the states on a predominantly southern route and will wrap up the drive in 18 days in Sacramento, California.

The automaker introduced the electric vehicle in a campaign in January from AOR Johannes Leonardo featuring a zoetrope. The brand is publicizing the road trip on social media using the hashtag #ID4EVRY1.

“Range anxiety is a thing of the past, and this drive is proving that not only is long-distance driving an easy task, but it’s also affordable,” says Dustin Krause, director, e-Mobility, Volkswagen of America, who is leading the marketing event.

The route will include recharging the vehicle at Electrify America charging stations and at hotels offering EV charging.

Each 2021 ID.4 comes with three years of DC fast charging at each of Electrify America’s 550+ stations across the U.S. at no additional charge. The charging company has more than 2,400 DC fast chargers, including two cross-country routes to take electric vehicle drivers from Washington, D.C. to Los Angeles and Jacksonville, Florida to San Diego.

The ID.4 is Volkswagen’s first all-electric SUV and has an MSRP starting at $39,995 before potential $7,500 federal tax credit.

Range anxiety is definitely still an issue with consumers, per a recent study by Continental. Enthusiasm for electric cars is strong in China, while reservations still need to be overcome in Germany, France, the United States and Japan, according to the Continental Mobility Study 2020, in which representative groups of people in France, the USA, Japan, China and Germany were surveyed about their mobility habits.

Many doubts about electric cars continue to persist, with a lack of charging stations being the most cited argument against electric driving in four of the five countries studied. However, acceptance of electric mobility has increased in all five countries surveyed in recent years, per the study.