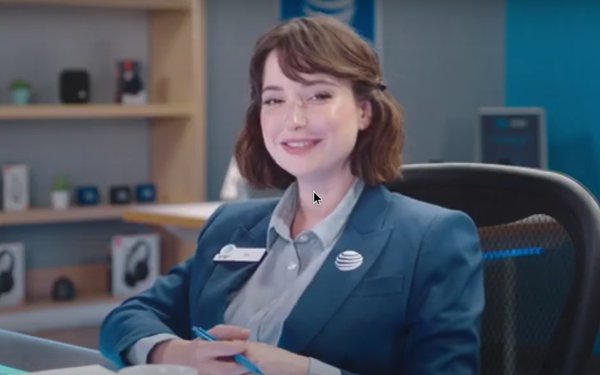 Milana Vayntrub, who portrays AT&T Wireless store clerk Lily Adams in commercials, has a prominent role in a batch of new NCAA March Madness ads for AT&T during the games that started last week.

But Vayntrub is dealing with her own kind of March madness.

For several months, Vayntrub has been the subject of coarse sexist comments about her body on Twitter and Instagram. Some are especially vile and accompanied by photos of women in revealing costumes, with Vayntrub’s face photoshopped in.

In the Internet world, it seems actors usually choose to just forget about unsavory parts of fame like that. But for the new NCAA ads, Vayntrub took action.

In new ads and in so-called integrations called “AT&T at the Half” in which she shows up to drolly explain basketball terms, she is mostly filmed from afar or sitting behind a desk. The camera angles leave her body proportions purposely indistinct.

As she tweeted last Saturday: “Been getting a lot of ‘why are they placing her body like that in those ads?’ Well, I direct the ads. I place myself like that. And it’s because of the thousands of unwelcome comments I receive about my body. You’ve lost the privilege of looking at it until I feel safe again.”

Last August, Vayntrub, weary from the online harassment, hosted a live-stream video pleading with followers to cut it out. Even while she spoke, a stream of rude comments appeared. Other comments were sympathetic, or suggested that by showing she’s bothered, she satisfies her tormenters.

That may be the case: Many of the comments on a YouTube version of her video plea seem to be about as vile as the ones she complained about.

Earlier, AT&T said, "We will not tolerate the inappropriate comments and harassment of Milana Vayntrub, the talented actor that portrays Lily in our ads. We have disabled or deleted these comments on our social content that includes Lily and we will continue to fight to support her and our values, which appreciate and respect all women.”

An AT&T spokesperson said there will be eight ads introduced during the March Madness cycle, and more than 10 halftime segments, which have included explanatory items like why fans yell "Airball" in unison when an opposing player's shot completely misses the basket. "It's the law,' Lily explains.