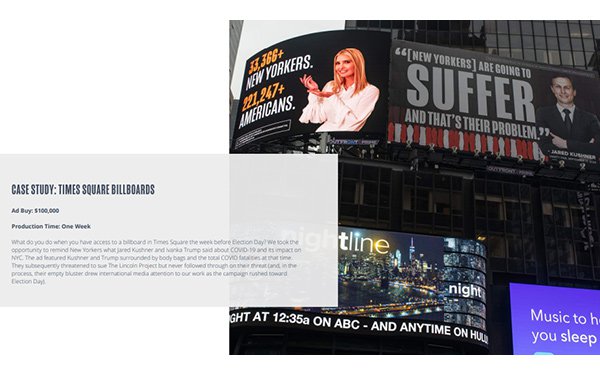 The super PAC Lincoln Project released what it’s calling its first annual “Stewardship Report,” highlighting its activities and financials since it was created in late 2019.

The report comes amid a scandal involving John Weaver, one of its since-departed co-founders, who has been accused of multiple instances of sexual harassment of young men both inside and outside of the Super PAC.

The report also follows accusations of financial self-dealing by founders of the group, which raised about $90 million in funds between November 2019 and January of this year.

The report was compiled by a Transition Advisory Committee formed by the PAC’s board and led by Tara Setmayer, a CNN and ABC News political commentator and current fellow resident at the Harvard Kennedy School’s Institute of Politics. She was communications director of the U.S. House of Representatives from 2006 to 2013.

The Stewardship Report does not address the harassment scandal, which is being investigated by an outside law firm.

What it does do is lay out the group’s fundraising, advertising and spending strategies with financial details that it claims “refutes much of the misreporting you have seen in the media on our effectiveness and ethics.”

About $27.3 million of the total passed through Summit Strategic Communications, the consulting firm started by LP co-founder Reed Galen to produce and distribute ads and raise funds, among other costs. Summit — one of two “prime contractors” designated in the report — received $1.4 million in “political/communications” fees.

About $22.5 million of LP funds passed through digital consultancy Tusk, the other prime contractor named in the report and founded by political strategist Ron Steslow. As with Summit, the report states that most of that money went to production and distribution of ads, legal and other costs. Tusk collected a consulting fee of about $2.4 million.

LP, MediaPost’s Creative Agency Of The Year, said it would create a financial comptroller position to analyze and account for disbursements in the future and also create a “donor advisory committee” to “offer advice and counsel in this area.”