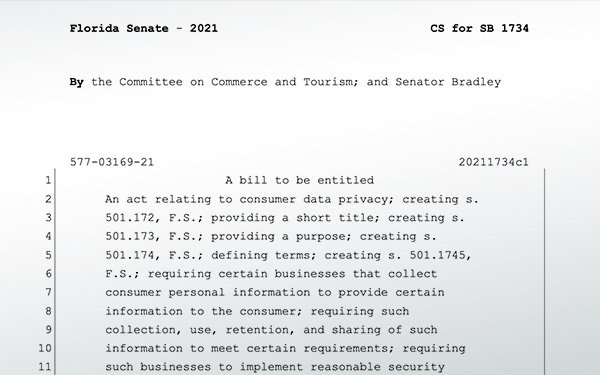 A fast-advancing Florida privacy bill that would give consumers the right to opt out of targeted advertising is drawing opposition from the ad industry.

The Consumer Data Privacy bill (HB 969 and SB 1734), first unveiled in February, would broadly require companies to notify consumers about data collection, and allow consumers to opt out of the sale of their personal data, as well as its processing for purposes of targeted ads.

The bill defines targeted advertising as ads based on people's predicted interests, as determined by data gathered from people's activities over time and across businesses, websites or other online applications.

The proposed law also defines personal information as encompassing the type of pseudonymous data relied on by ad tech companies, including information that “identifies, relates to, describes, is reasonably capable of being associated with, or could reasonably be linked, directly indirectly, with a particular consumer or household.”

The measure, as currently drafted, would allow consumers to sue for up to $750 in damages per violation, and empowers state authorities to seek fines ranging from $2,500 to $7,500 per violation.

The major advertising organizations oppose the bill and are asking Florida lawmakers not to pass the measure.

Among other objections, the ad groups say consumers shouldn't be able to bring private lawsuits over violations.

“We believe SB 1734 would impose new and particularly onerous requirements on entities doing business in the state, and would unnecessarily impede Florida residents from receiving helpful services and accessing useful information online,” the groups write.

They go on to ask lawmakers to study the issue, in lieu of passing a bill this year. The ad organizations made a similar request to leaders of the Florida House.

When the bill was introduced, Florida Governor Ron DeSantis said the measure marked “another important step to safeguard Floridians against the often-unchecked power of 'Big Tech.'”

“For far too long, Big Tech companies have abdicated their responsibility of safeguarding and securing the data of Americans and Floridians; in fact, rather than protecting our data, they are profiting from it,” he stated.

But Dan Jaffe, executive vice president for government relations at the Association of National Advertisers, counters that the bill's provisions would affect a broad range of companies beyond the largest Silicon Valley companies.

“The impact of the legislation in Florida goes way beyond any of the platforms,” Jaffe says.

But the bill in Florida, which has already cleared two committees in the House and one in the Senate, is moving especially quickly, Jaffe says.