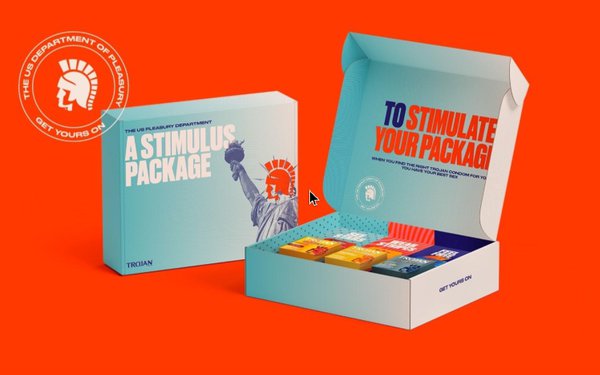 You could kind of guess with all the “stimulus package” talk in the last year, it wouldn’t be long before the phrase would end as a wink-wink joke in a marketing campaign.

Here comes Trojan Condoms. It just introduced its “Stimulate Your Package” campaign, a pun based on the federal pandemic relief package that was designed to be a prophylactic for a limping economy.

(An application is available via @TrojanCondoms on Twitter. And no, this isn’t an April Fool’s Day prank.)

Trojan is indeed hoping Americas’ sex life gets going. It’s there to help.

One sign of a good condom market, paradoxically, should be one in which an unusual number of couples are having babies.

Because of the uncertainty caused by the pandemic, and because moms and dads--and their existing children -- were around the house a lot in 2020, the Brookings Institute researchers say no such thing happened.

It once predicted 300,000 to 500,000 fewer births in 2021 than the year before. Because economic conditions improved, it now sticks to the lower number. That’s still a lot.

The Brookings Institute cites a Kinsey Institute report that found nearly half of U.S. adults reported a decline in their sex lives. Another research group said 34% of women reduced the number of children they intend to have or delayed plans.

On an earnings call in February, Britta Bomhard, chief marketing officer, said the company is banking on an  “eagerly awaited bounce back of sales,” noting that “condoms mean pleasure. Eighteen-to-24-year-olds can't wait to get their social lives back. And with college campuses reopening, 2021 looks promising.”

There’s still the matter of getting the next round of stimulus checks many people are still waiting for. The Treasury Department assures Americans: They’re coming.