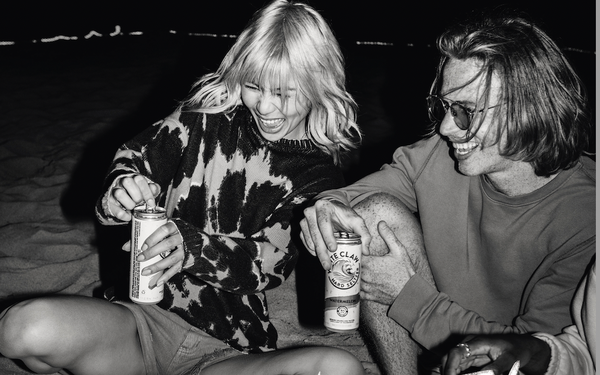 Another summer of White Claw may be around the corner, but this year, the hugely dominant hard seltzer drink from Mark Anthony Brands will be accompanied by something different: a global advertising campaign.

A big part of the White Claw story is that its growth was largely due to fawning user-generated content on YouTube and other social media, along with word-of-mouth and memes online.

So the seven new ads, around the theme, “Let’s Claws,” will show up on digital channels, natch.  But they’ll also show up on Bravo, E!, ESPN, ESPN2, FX, NBC, NBC Sports, Unimas and Univision, and in out-off-home signage. The campaign also goes into the five foreign markets White Claw entered last year, with another 10 planned in 2021.

It seems nothing could have been more uncool than ads that looked like they were trying too hard to impress.  So these spots are meant to be evocative of the casual, unslick, all-for-fun, post-slacker attitude of White Claw’s UGC.  Those are the videos, memes and hashtags that the company says have generated over 4 billion impressions, and 46 times more social media impressions than all the other hard seltzers out there.

In the one-minute ad -- a pastiche of the others -- a bunch of young people, shown in quick video cuts, chill while the song, “Hey! Get Out the Way” by a group called Who, accompanies them with the repeating in-your-face verse “It don’t matter what they like/It don’t matter, it’s your life.”

" ‘Let's White Claw’ was inspired by the love our fans have for the brand. It is a celebration of that feeling of pure uncomplicated fun that White Claw enables," said John Shea, chief marketing officer, announcing the campaign.

White Claw’s biggest single social media push came from a 2019 YouTube video from comedian Trevor Wallace who uttered the line, “Ain’t no laws when you’re drinking Claws” that set the White Claw sales catapult. (The video has been seen 5.7 million times on the channel.)

The saying is reportedly so common, people of a certain young age only have to say “Ain’t no laws” to make their affiliation known. At the end of 2020, the brand compiled a short “best-of” video of users’ creative ways of showing off their allegiance.

White Claw has a 50% dollar share of the market -- a share that was even larger before Truly, Bud Light, Michelob Ultra, Corona,Vizzy, and countless seltzers got cranking.

White Claw has noticed, though.

In March it introduced a new line of hard iced tea drinks, just a couple months after Truly, its closest competitor, did it first. And there are these ads.

But, as White Claw notes, last year it contributed over $1 billion in growth to the hard seltzer segment growing +118%, which was more than the next two largest beverage growth brands combined.