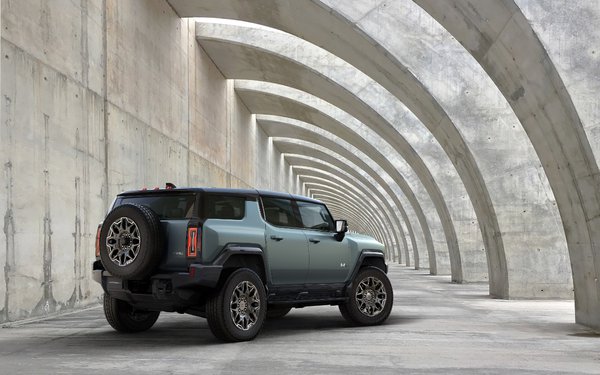 GMC’s electric lineup expands with the addition of the 2024 Hummer EV SUV, which made its debut during the NCAA’s Final Four games on Saturday afternoon.

Fans can watch the reveal and place a reservation for the vehicle, which starts at $105,595, at GMC.com/HummerEV.

Signature features include Extract Mode, which lifts the frame up from the tires to allow passage over objects on the road, and CrabWalk1, which rotates all four wheels at the same angle by up to 10 degrees, enabling the vehicle to move diagonally (like a crab.)

The spot features a cover version of the Led Zeppelin 1970 classic “Immigrant Song.”

Additional details on the new SUV will be published on April 5, per General Motors.

Then, GMC revealed the Hummer EV pickup on Oct. 20 via a multiplatform activation Including a Twitch livestream. GMC  again worked with James along with a handful of other high-profile social media influencers in fashion, design, and off-roading to share the reveal and create a cultural moment on social media,

“The GMC Hummer EVs were envisioned to be the most capable and compelling electric supertrucks ever,” said Duncan Aldred, global vice president of Buick and GMC in a release. “The new Hummer EV SUV is the next chapter, which will offer many options for customers to tailor the truck to their lifestyles, while continuing to encourage them to forge new paths with zero emissions.”