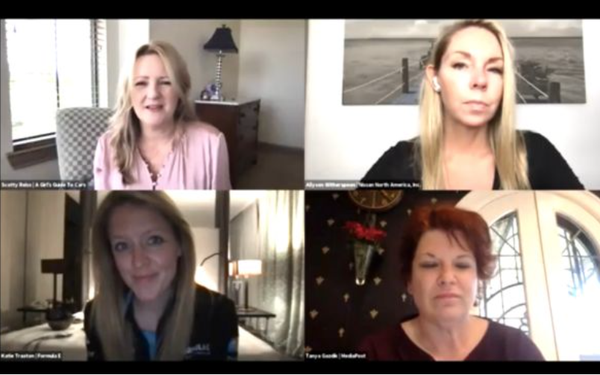 Katie Traxton, one of Formula E’s top marketers, who took the online “stage” with Nissan Chief Marketing Officer Allyson Witherspoon, broadly hinted that the electric vehicle race will be returning to Brooklyn this year. Although an official announcement has not been made, it is expected to be coming soon.

The 2019 Brooklyn race, which Traxton spoke about along with Witherspoon, was a hit, attracting thousands of spectator and converting many a new fan, Traxton said during the talk. Witherspoon added that the race gave Nissan a way to reach a highly desirable target audience. The automaker recently extended its Formula E commitment.

In a fireside chat, Toyota’s Dedra DeLillli recounted how let down she and her team felt last year when the summer Olympic games in Tokyo were postponed due to the pandemic. Toyota was set to be a major sponsor. But DeLillli, group manager, sponsorship, strategy and auto shows, tried to look at it as an opportunity to engage consumers with the athletes in a different way.

She promises that the upcoming creative, which has been sitting “in the can” for over a year, will soon see the light of day when the Olympics get underway. Even with limited attendance, there is tremendous hope and energy associated with the games, which could go a long way toward re-engaging pandemic-weary consumers, she said.

In another presentation, keynoter Melissa Grady recalled how Cadillac had to make rapid shifts in plans depending on how the pandemic was affecting each region on the country.

The pandemic forced rapid change, like a “Cadillac Live” digital interface, which allows consumers to have their own, personalized showroom experience from the convenience of the digital device anywhere.

The General Motors brand accelerated a decade’s worth of digital transformation in one year, she recalled.

Other presentations included a touching panel where Hyundai’s Kate Fabian and Ford’s Dave Rodriguez outlined the feedback they have gotten regarding the brands’ COVID-19 assistance efforts.

Ford’s Dibrie Guerrero and Cadillac’s Eric Neville both educated and engaged with case studies. Guerrero focused on the need for multicultural representation in advertising, while Nevillie spoke about addressable TV and the success of audience modeling and targeting.

All of the presentations are available for viewing on the agenda page, but those who attended got the benefit of lively Q&As and networking opportunities.

Planning is already underway for MediaPost’s next Marketing: Automotive conference in August. Prospective speakers are invited to send me an email: Tanya@MediaPost.com