'Wahl Street' Journal: How Busy Mark Wahlberg Does It 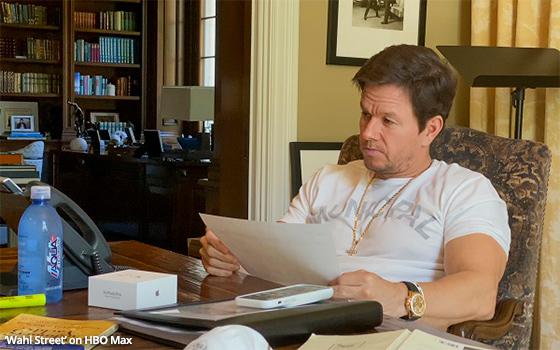 Most of us would be more than satisfied with one career if that career was earning top dollar as one of the world’s busiest and most bankable movie stars.

Plus, as Mark Wahlberg makes very clear in this new HBO Max docuseries, “Wahl Street,” his busy life leaves him little time for his family.

And although he acknowledges this, and says he regrets it, he is off to another movie shoot overseas anyway. In between takes, Wahlberg, 49, is seen in an on-set tent taking meetings with various people who manage his many business ventures.

He is indeed a busy man with a schedule that apparently allows for little or no down time.

The title of this new show, “Wahl Street,” has been chosen because this series, which started streaming this week on HBO Max, focuses more on Wahlberg’s many business interests than on his moviemaking responsibilities.

According to the show, these interests include his own production company, a bottled water brand (Aquahydrate, seen in the photo above), a chain of gyms, an apparel company in development, some sort of automobile concern and the hamburger restaurant chain called Wahlburgers that is run by members of his family.

Do you ever have the feeling that you are not doing enough in each 24-hour day? Well, here comes Mark Wahlberg to make you feel this way even more acutely.

In the series’ half-hour premiere (the first of six half-hour episodes), Wahlberg is seen talking almost constantly to various underlings and business associates on his cell phone, taking meetings (either in person or remotely via video connection), being driven places in an SUV and then striding onto his private jet to fly to London for a movie shoot.

The time is December 2019, a few months before the pandemic lockdowns that slowed down all of our lives in 2020 -- including, presumably, Mark Wahlberg’s. But before that happens, there is much for him to do.

At one point in the series premiere of “Wahl Street,” we learn that the buff, fit Wahlberg requires in every movie contract that a fully equipped gym be set up in his hotel suite for the duration of on-location shoots such as this one in London.

And before you can say “inferiority complex,” he is working out with various business associates at 2:30 in the morning, before he sets off for a 10-hour shooting day.

Clearly, Mark Wahlberg is a master of the universe, master of his domain and the center of attention.

He is constantly trailed by an entourage (it just so happens he was an executive producer of the HBO series “Entourage,” which was based loosely on his life as a young movie star).

Some of these people are identified in the premiere episode, and some are not. Some of them are assistants and others are the executives in charge of some of Wahlberg’s business interests. Apparently, they are required to travel with him and even work out with him at 2:30 a.m.

Wahlberg even says of one of them that it is not unusual for Wahlberg to call him at 3 o’clock in the morning almost every day.

In the show, the man who is on the receiving end of these wee-hours phone calls insists that’s OK, but you have to wonder if it really is OK to badger an underling every day at 3 a.m.

But this is Mark Wahlberg’s world and the rest of the people in this show just live in it. Unsurprisingly, there is very little dissent expressed in Wahlberg’s world -- a place where almost everyone who comes into contact with the star agrees with everything he says.

Through it all, Wahlberg talks about loyalty and long-time friendships, but he is also a swaggerer who is seen scowling at the world around him a lot more than smiling at it.

While watching “Wahl Street,” one gets the impression that Mark Wahlberg has been used to getting his own way for a very long time.