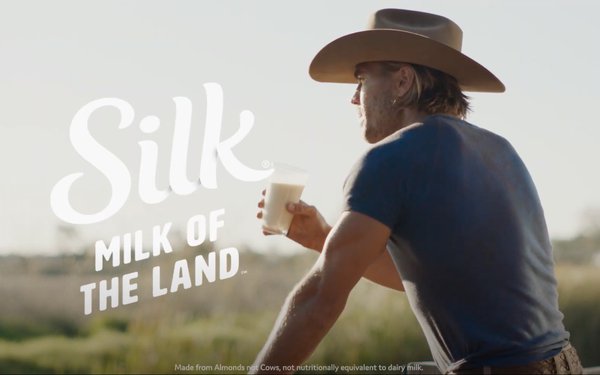 Four years after acquiring the Silk brand, Danone is setting out to “demystify” plant-based products—starting with an explanation of the derivation of almond milk.

Danone’s efforts will unfold over the course of 2021 in a multiproduct campaign titled “Milk Of The Land.”

The first commercial, called “What Is Almondmilk” from the Lightning Orchard agency, opens with an aerial view of an almond orchard. The visuals segue to almonds being shaken from trees on their way to becoming drinkable.

The images are accompanied by a young girl singing a new twist on the song  “Technologic” from the band Daft Punk—the lyrics of which begin “Buy it, use it, break it, fix it, trash it, change it -- now upgrade it.”

The center of the campaign concept is the fact that giving up dairy products can be anxiety-inducing for many people, according to Silk vice president Derek Neeley.

“The purpose of the campaign is to demystify the plant-based portfolio,” Neeley tells Marketing Daily.

“We don’t think that’s the right way to go,” says Neeley. “About half of Silk consumers have both dairy and plant-based in their fridges. So we feel like they’re complementary and standalone beverages used for different occasions—and consumers are allowed to make that choice.”

“It’s really open to any consumers who are willing to accept and try both plant-based beverages as well as consume dairy milk,” says Neeley.

Silk partnered with Daft Punk in the creation of the lyrics to the first campaign commercial.

“We have a tremendous respect for Daft Punk and the work they’ve created and so we wanted to make sure we were in lockstep with them,” says Neely.

Danone acquired Silk—now the #1 U.S. plant-based beverage brand—four years ago this month with its acquisition of WhiteWave Foods, whose first product was soy milk in 1977.

According to data from Nielsen, retail sales of dairy alternatives rose 16% in the 52 weeks ended April 3, compared to the same period a year earlier. The biggest gainers were oat milk (+134%) followed by almond milk and coconut milk—both up 11%

U.S. launches of dairy alternative drinks increased at an average annual rate of 12.3% from 2017 to 2020, according to Innova Market Insights’ Innova Database.