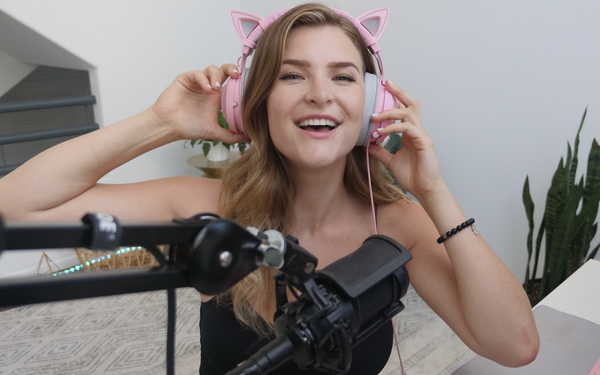 Above: Kristen Michaela (aka KittyPlays), who will moderate a Tampax panel about women and gaming.

Rarely does an event sponsor become a headline, but it might happen this Friday when Procter & Gamble’s Tampax hosts the first-ever Tampax Gaming Fest.

The virtual event will be streamed on the Twitch gaming app Kitty Plays channel and on the gaming-centric Venn streaming channel.

The Gaming Fest will be in two parts. One features three all-female teams alongside a fourth team of amateurs, vying for a $10,000 tournament prize.

The other part might cause the headlines, or the social media equivalent. Top gamers Katherine Gunn (aka KatGunn or MysticGunn) and Rumay Wang (aka itsHafu) and multimedia personality Erin Ashley Simon will hold a panel discussion about their experiences as women in a male-dominated industry, and "the power women can harness when they learn more about themselves and their bodies," according to the brand. Undoubtedly, the subtext is how women players famous or not have to deal with sexist comments from men in the macho gamer industry, where rampant sexism stirred the business starting in 2014.

Twitch influencer Kristen Michaela (aka KittyPlays) will moderate the session.

“We were happy to learn so many talented female gamers are fueling the growth of esports, but concerned that many in this community still consider period conversations taboo,” says Camille Zahniser, brand director of North America, Tampax.

If that’s true, it doesn’t seem surprising. A women’s panel and gamefest sponsored by the leading brand of tampons and feminine sanitary products is a jarring contrast to the gaming scene just a few years ago.

The gaming industry is still trying to live down Gamergate, the eventually well-publicized attack in 2014 by thousands of male gamers who harassed, threatened and belittled women who were players, journalists or otherwise involved in the esport.

“If you had told me seven years ago that I would be participating in a tournament hosted by a period brand, I would have been so hyped that making a career out of playing video games had come this far,” Michaela said in a statement.  “I love that a brand like Tampax has stepped up to support and validate female gamers by encouraging conversations about our experiences and bodies. Our shared mission to help women feel their power and move towards acceptance of our periods as a positive force is such a perfect fit.”

Some surveys show that men now make up an even larger share of the gamer market, but in general, the ratio is around 50+% male and 40+% female.

Analysis of game content is another story. Research from Verve Search last year concluded that only one in 10 games released  in 2020 feature a female protagonist. That’s the lowest proportion in five years.

In 2015, Tampax Pearl Active enlisted soccer star Alex Morgan to create videos and go around the country giving girls soccer lessons, with a gentler push about the brand.