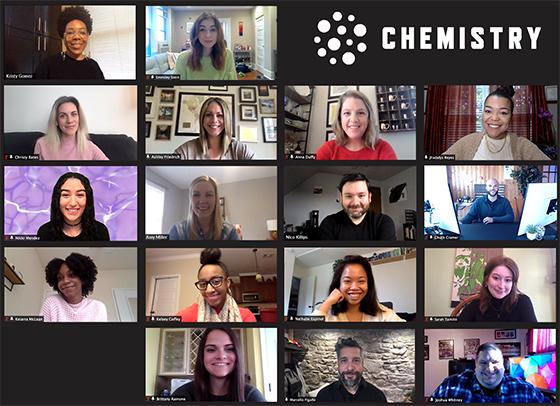 Chemistry added 36 new team members — 34% growth —  across production, creative, strategy and account management in 2020 as the agency expanded its diversity.

Some of the new additions include Christy Bates, who previously served as SVP, global account director at BBDO New York, joining as VP client lead in Pittsburgh.

This Pittsburgh office also adds Marcello Figallo as VP consumer experience after 20 years of working with brands such as Apple, PNC, FiServe, McDonald's, RiteAid, and SC Johnson, as well as multiple startups.

Kristy Gomez joins the Atlanta office as director of communications planning and Ashley Hampton departs Buffalo Wild Wings as manager of brand advertising to now serve as group brand director. Nathalie Espinol will also join the team as brand strategy Director. Prior, she was the lead strategist for KO:OP, the internal creative agency for The Coca-Cola Company.
The agency’s infusion of new faces continued through its Atlanta-based Ally Internship, which is designed to introduce Black creatives to a number of creative fields as viable career paths through first-hand agency experience. As part of this paid internship program, Chemistry partners with Black-owned businesses in the Atlanta area, including Cam Kirk Studio and October Social Media, to cross-pollinate talent.

“We’ve embarked on a long-term hiring strategy that is changing how we operate, by bringing on new talent and evolving the agency to create real change,” says Chris Breen, CCO, Chemistry Atlanta. “These mid-level and leadership hires, along with our Ally Internship, are moving us toward making sure our agency, and the advertising industry as a whole, more accurately reflect the world we live in.”