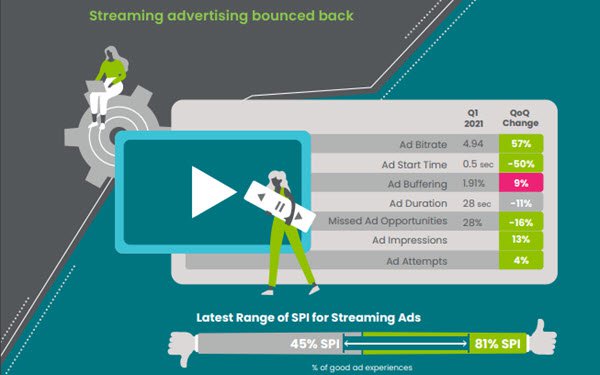 This year’s first quarter saw a resurgence of streaming ads, with ad attempts up 4%, ad impressions up 13% and missed-ad opportunities falling 16% quarter-over-quarter, according to Conviva’s Q1 State of Streaming report.

Ad quality also improved. Ad start times were down to half a second — a 50% improvement — and bitrates rose 57% compared to fourth-quarter 2020.

Global streaming viewing time grew 36% in the quarter, with North America’s 18% year-over-year growth exceeded by triple-digit rates in other regions, including South America (240%), Africa (149%) and Europe (122%). 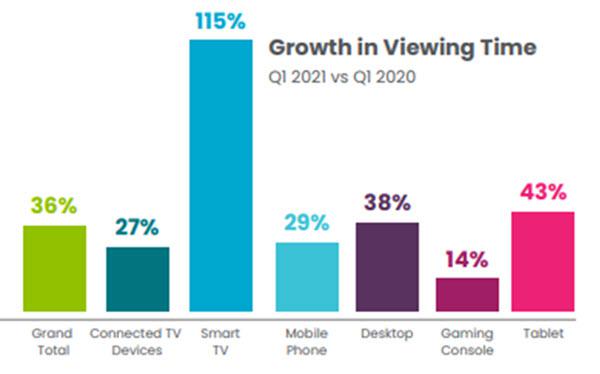 Reflecting international growth in adoption of a variety of connected devices, Roku and Amazon Fire TV, while still dominant, saw declines of 2.9% and 3.6%, respectively in share of viewing time. 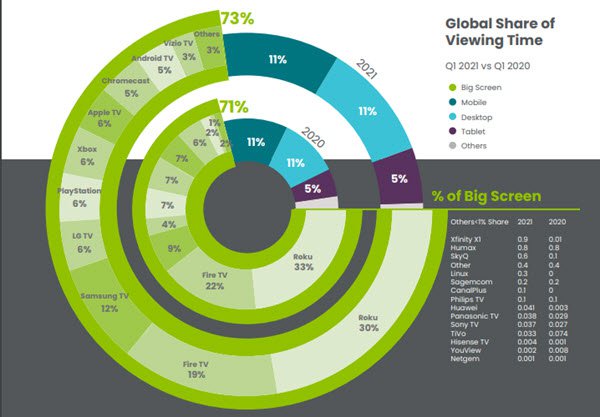 While Roku captured a 30% share of global big-screen viewing time, that was driven by North America, where it commanded 37% share in Q1 2021. In Europe, its second largest market, Roku had just an 8% share of the big screen, and only a 4% share or under in Africa, Asia, Oceania, and South America.

Streaming publishers increased their use of social platforms to drive audiences and engagement as they ramped up content.

Netflix dominated cross-platform total audience, with 234 million followers across Facebook, Instagram, TikTok, Twitter, and YouTube as of Q1 2021. Apple TV, Amazon Prime Video, WWE Network, and Disney+ made the top five, with each drawing more than 10 million cross-platform followers. Hulu, along with Crunchyroll, Funimation, LOL Network and AsianCrush, were in the top 10. 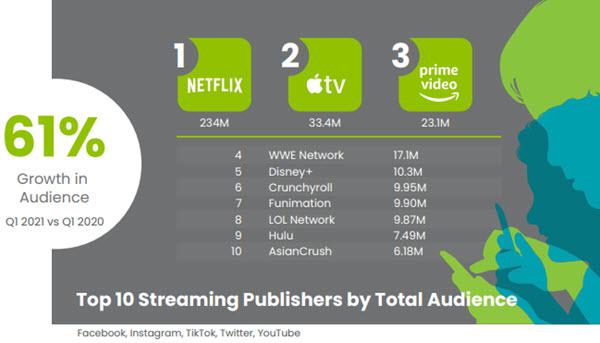 Super Bowl advertisers saw their average social engagement increase nearly threefold as compared with pre-game levels, according to the data.

The report’s streaming data was collected primarily from Conviva sensor technology embedded in 3.3 billion streaming video applications, and its social data from more than 900 accounts and 35 billion engagements across Facebook, Instagram, TikTok, Twitter, and YouTube.