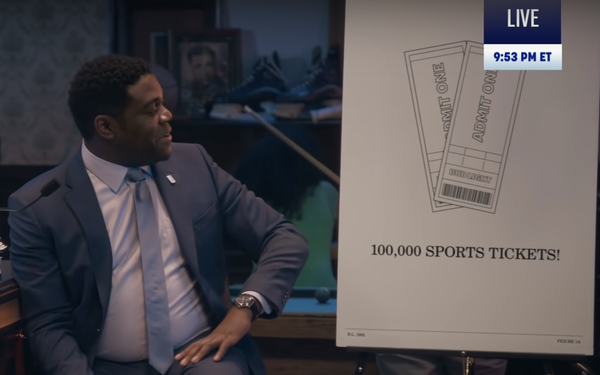 Summer is Christmastime for beer, and after enduring one summer blocked by the pandemic, brewers big and small are gearing up with showy promotions to make the most of what should be a happier season.

Bud Light just rolled out its Bud Light Summer Stimmy, kind of a stimulus plan with a foamy head. To stimulate summer good times, the company is giving away up to 100,000 tickets to sporting events, along with free tickets to big music acts nationwide. It’s also offering to pay for a drinker’s first round of beers. (Separately, the Budweiser brand earlier announced it would give a free beer to anyone who showed proof of being vaccinated.)

The brand says the promotion is worth up to $10 million in prizes.

"We feel it's our obligation to welcome consumers back to the places they enjoy Bud Light -- their favorite bars, sporting events and live music venues -- when it's safe,” states Andy Goeler, Bud Light’s vice president of marketing.

The company hired actor Sam Richardson to be its "Appointed Bud Light Summer Stimmy Reader," and in a new ad, he recites the perks of this stimulus, more or less in the style of a Washington bureaucrat reading details of a new piece of legislation. Richardson, who played a brilliant but unaware aide on “Veep,” makes his announcement from a bar, broadcast on what is playfully called B-Span.

Bud Light is not the only brand tapping into major league baseball. Kona Brewing Co., a craft beer-like brand owned by Anheuser-Busch, has dropped three new spots for summer produced by the Duncan Channon agency  featuring two Hawaiian “bruddahs” sharing their advice for how to chill while watching the game. One tip: "Bring in a new pitcher.”

Despite the Bud Light ticket offering, Anheuser-Busch is still going to miss some opportunities this year at Major League baseball stadiums. All but one team (the Texas Rangers) is limiting attendance at games this year. And though it’s very early in the season, when chilly weather itself can keep fans away, for games scheduled through the first three weeks of the season, attendance was under 75% of stadiums’ new temporary (small)  capacity limit for 11 of MLB’s 30 teams, according to data compiled by SFGate.com.

Overseas, Heineken reportedly is now limiting pubs to just three kegs a week of a couple of its brands as Britons start loosening up from COVID-19 restrictions.

Other overseas brewers were also reported to be adding production to keep up with surging demand. MorningAdvertiser.co, a website dedicated to the pub trade, said beer-makers are anticipating another big rush on May 17, when the U.K. government is due to make a further loosening of restrictions. A sales director for the Anheuser-Busch-owned Budweiser Brewing Group in the U.K. said its three breweries were working around the clock to meet anticipated surges in consumer demand.