Earlier this week, I wrote a column  about the increasing prospects for inflation, especially for advertising goods and services. Today, I’d like to make the case for some deflation -- specifically in mobile advertising costs. The reason? Twofold. One is that mobile already has experienced a hyper-acceleration in demand -- and advertising costs -- in recent years, following the parallel trend in consumer and publisher adoption. Secondly, the impact of Apple’s IDFA changes is likely to take some pressure off mobile ad pricing for a very simple reason: it will be harder for marketers and agencies to attribute both in-app and mobile web ad exposures to individual identities in their performance-based campaigns, which have been a major driver in pushing mobile ad CPMs in recent years, especially in biddable markets.

I don’t have explicit inflation data to prove this, but some recent overall ad price data released by Aisle Rocket for Facebook’s CPM trends indicates they’ve been surging in the period leading up to Apple’s change.

The analysis, which examines the period leading up to mid-March of this year, found that Facebook’s ad prices have jumped 30% over the comparable period in 2020. That’s overall ad cost. On a CPM basis, the analysis indicates a 60% rise in cost-per-thousand impressions since the ad market bottomed out in March 2020 at the height of the pandemic-related ad recession.

While these are overall Facebook ad costs and CPMs, I’m going to bet a big part of them can be attributed to mobile ad impressions, because much of the data is coming from performance marketers, especially those pushing app downloads. (It was interesting that in Twitter’s recent ad products briefing with the trade press, it said it was making a push into performance advertising this year, and that app install marketing was the first category it was focusing on.)

And while macro factors are likely to drive overall advertising price inflation this year -- a response to a resurgent economy and pent-up demand -- there is a big micro factor influencing the supply-and-demand dynamics of mobile advertising. It's the same one Facebook has been grousing -- and lobbying -- about most of this year: Apple’s new consumer opt-in interface for IDFA, and its specific impact on Facebook and other identity-tracking based mobile inventory of its ilk.

“CPMs may fall [for mobile],” predicts Paul Silver, Global Chief Strategy Officer of MiQ, noting, “Depending on the proportion of users opting in to IDFA tracking, a fall in trackable users in-app could lead to reduced bid competitiveness and reduced CPMs, which may lead to an opportunity in the short-medium term to run campaigns across iOS environments for increased value.

“While legacy iOS measurement will be diminished, emerging modeled approaches to reach and frequency and conversion modeling can still provide an insight into outcomes and performance in these environments." 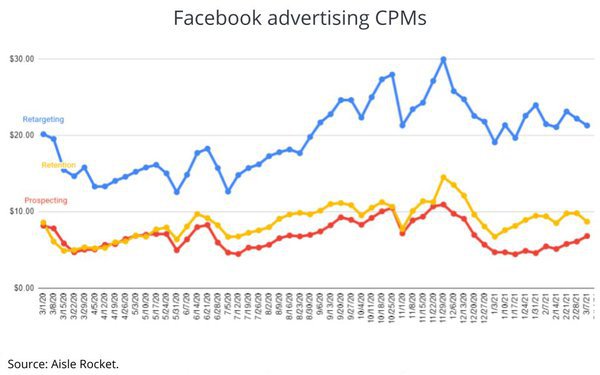