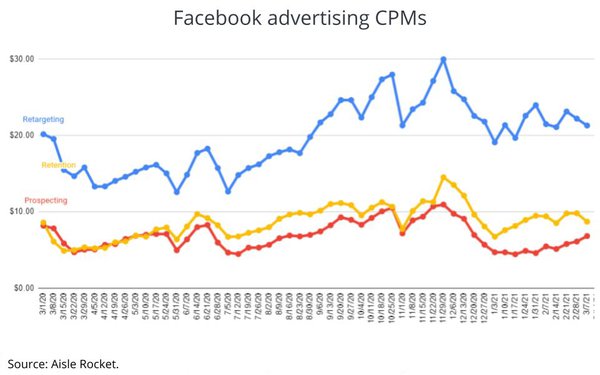 Ad prices on Facebook have surged 30% over their 2020 levels, according to an analysis released today by performance marketing agency Aisle Rocket.

The analysis, based on data as of mid-March, shows average CPMs (or cost-per-thousand) are averaging around $8, which is about 60% higher than the $5 average they bottomed out at in March 2020, following the COVID-19 lockdowns in the U.S.

Aisle Rocket said that $8 CPM is also "roughly equal to pre-pandemic levels despite the ongoing emergency."

In fact, the agency said its models indicate that average Facebook CPMs "might hit $11 by late summer and mid-teens by November of 2021."

One reason for the Facebook ad price inflation has been increased demand from ecommerce brands, which the agency said "have flourished during the pandemic."

“Facebook ad prices have historically risen roughly 30% year-over-year before the COVID-19 pandemic, so the fact that we’re seeing a 30% rebound this year -- still in the midst of social distancing and vaccination -- means that pricing will likely remain very high for the rest of 2021,” Aisle Rocket CEO Ross Shelleman noted, adding: "The economy is set to come roaring back, and there’s a lot of competition to get in front of consumers who have been sitting on built-up savings they haven’t been able to spend this past year.”