beyond the press release 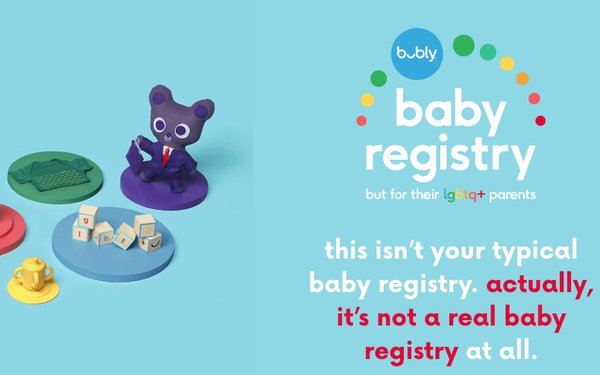 Sparkling water brand Bubly is partnering with the nonprofit Family Equality to raise awareness and financial support for what can be a difficult “path to parenthood” for the LGBTQ+ community.

The registry contains such fake items as a “surrogate sippy cup” and “court gavel rattle” to highlight the financial needs of LGBTQ+ parents-to-be and elicit donations to Family Equality.

“Corporate healthcare systems still have a ways to go to ensure that LGBTQ+ parents have equal rights and opportunities to actually create a family,” Stevenson adds. “There are still 11 states that allow discrimination. They allow taxpayer-funded adoption and foster care agencies to turn away LGBTQ+ people.”

The ability to legally form families through adoption or surrogacy is a major hurdle For people who use assisted reproductive technology—which includes surrogacy or in vitro fertilization—establishing legal parentage for the non-biological or non-gestational parent can be time-consuming and expensive.

Among other things, the process involves “home studies, FBI criminal background checks and court hearings,” Stevenson says. “Even though the non-biological or non-gestational parent is listed on the birth certificate, you still have to go through all those legal hurdles to establish legal parentage.”

Visitors to the baby registry, part of Family Equality's website, are told they won’t actually receive the items they select. Each carries a price representing a donation to Family Equality.

In addition to sharing stories of LGBTQ+ parents across its social media channels, PepsiCo-owned Bubly is donating $100,000 to Family Equality.

PepsiCo has added Family Equality to the ranks of its charity partners for the company’s employee match program as part of the PepsiCo Gives Back initiative.