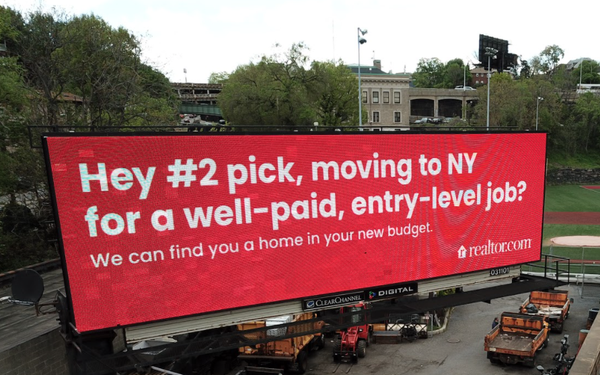 Realtor.com used this past weekend’s NFL Draft as the jumping-off point for an effort inviting this year’s new pro football draft picks to find their new home in their new city with the real estate search company.

Created by Huge Brooklyn, the out-of-home and social effort is running through May 5 in the top five draft markets: San Francisco, New York, Cincinnati, Jacksonville and Atlanta.

Highlights include customized permutations of the digital ads which went live to welcome the new draft pick in real time at the same time the draft was actually taking place.

The creative harnesses the topicality of the draft and the brand’s humor to showcase Realtor.com’s special features, including its location-specific search and filter capabilities and app user function, according to the company.

To support the campaign, the brand is partnering with 12  pro football players from the Jacksonville Jaguars, the New York Jets, the San Francisco 49ers, the Atlanta Falcons, the Cincinnati Bengals, the Detroit Lions, the New York Giants, the Washington Football Team, the Chicago Bears, the New Orleans Saints and the Los Angeles Rams to tweet about the first round picks with love from Realtor.com.

The effort is targeting first-time home buyers, especially those entering the job market for the first time, who may feel some kinship with the new NFL rookies, according to the company