From 'Mind-Numbing' To 'Bored To Death,' Digital Media Has An Image Problem 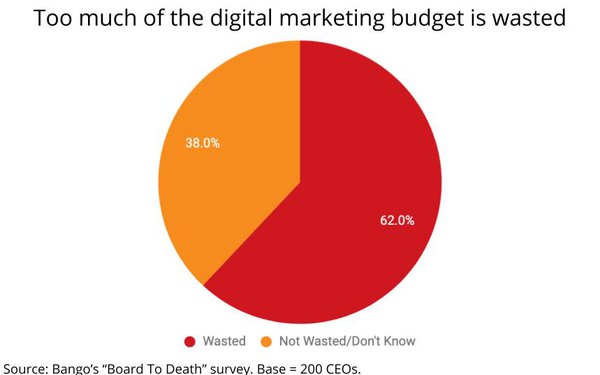 On the heels of the Association of National Advertisers’ announcement that it is embarking on a new study of the “mind-numbing” programmatic digital media marketplace, a new study suggests that digital media has a far deeper -- and higher up -- problem with corporate America. Specifically, in the C-suite.

In “Board To Death,” a new report from marketing technology developer Bango, corporate CEOs said they are not quite so enamored of digital media as the ad community’s enthusiasm would suggest. The report, based on interviews with 200 CEOs, found that 62% believe too much of their digital marketing budget is wasted on activities that don’t deliver meaningful results.

That stat belies much of the growth underlying digital’s expansion over the past several years -- especially during the pandemic -- because much of it was justified by so-called “performance” criteria, not softer measures like brand awareness or lift, etc.

But for all of digital media’s impact and/or results, the top corporate brass aren’t buying it. Sixty percent of the CEOs said they think the marketing potential of social media has been “exaggerated,” while 77% don’t see digital advertising as “a reliable source of new customers or sales.”

“Nobody’s saying that social media can’t add value,” says Bango CMO Anil Malhotra, explaining, “The problem is that this value isn’t translating to the boards of the businesses surveyed. Digital marketers have got so wrapped up reporting on clicks, likes and engagement rates, that they’ve lost focus on the business metrics that actually matter in the boardroom — leads, sales and profits.”

Malhotra adds that it’s not necessarily that digital media’s and marketing’s metrics are “wrong,” so much as it’s doing a poor job of explaining ot the C-suite how all that precision targeting is leading to “meaningful results.”

“The rise of Facebook and Google as ad platforms has convinced marketers that what people like and share is an accurate reflection of what they will buy, so today’s marketing budgets capture browsers, not buyers,” he explains, adding, “That’s why our report argues that digital marketers need to start targeting their audiences based on actual purchase behaviors. This is what will impress the board — the ability to turn social into sales.”

Following on the ANA’s “mind-numbing charge,” the “board to death” one should be a wake-up call to the digital media industry that they still have some explaining to do.

advertising, digital, programmatic, research
3 comments about "From 'Mind-Numbing' To 'Bored To Death,' Digital Media Has An Image Problem".
Check to receive email when comments are posted.
Read more comments >
Next story loading