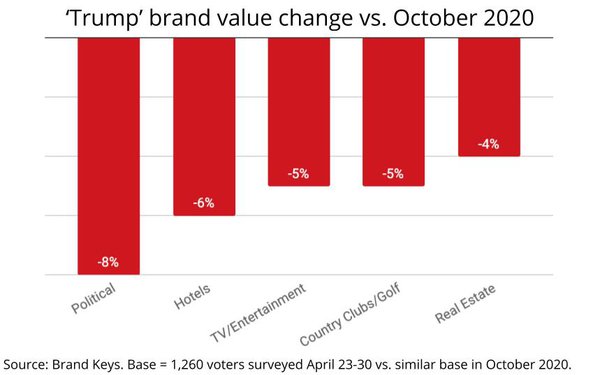 The "Donald Trump" brand's value has fallen since the former president was voted out of office, according to the latest data from brand valuation authority Brand Keys.

Brand Keys, which has been tracking the value of the Trump brand for more than 30 years, found it has slid in every major category it tracks, including the political one (-8%), hotels (-6%), TV/entertainment (-5%), country clubs/golf clubs (-5%) and real estate (-4%) vs. its value in those categories in October 2020.

Significantly, Trump's post-presidency brand value has fallen following its erosion during his overall presidency, according to Brand Keys Founder and President Robert Passikoff.

“When Trump entered the political arena, the brand lost efficacy in consumer categories it once dominated,” he notes, adding: “It’s difficult – virtually impossible – even for a brand as strong as Trump’s, to operate successfully in the consumer marketplace and political arena simultaneously. Political values and category values are  never synonymous, and almost always create brand dissonance.”

It's a dramatic turn of branding fortunes, according to Passikoff, who says the Trump brand's power to influence consumer and business perceptions of the products and services it was attached to was so profound that in 1991 Brand Keys named it its first "human brand."

"That meant a brand like Trump was able to successfully and profitably transfer those values – his values – seamlessly to products and services," he adds, noting that "Trump's historical value-adds were some of the highest we'd ever seen." Prior to running for president, Brand Keys found that attaching the "Trump" name boosted the value of real estate by 28% and TV/entertainment properties by 35%.

According to Brand Keys historical baselines, a brand name boosting the underlying value of products or services by 12% or more is deemed a "strong" brand.

"Trump's numbers were always off the chart," Passikoff recalls.

Some of the Trump brand erosion has been attributed to the fact that it simply has less visibility than it had before, Passikoff notes.

“We suspect the drop in the TV/Entertainment sector is due to Trump’s virtual disappearance from daily TV,” he says, adding: “He’s become less the ‘Entertainer-in-Chief’ and more an ex-politician playing golf at Mar-a-Lago, waiting to give himself a better lie, no matter how many GOP acolytes there seem to be.” Speculation about a Trump cable network evaporated, although, as Passikoff reflected: “A Trump TV show might revive some  badly wounded categories and soothe some of the inharmonious and negative values  consumers have recently come to associate with the Trump brand.”