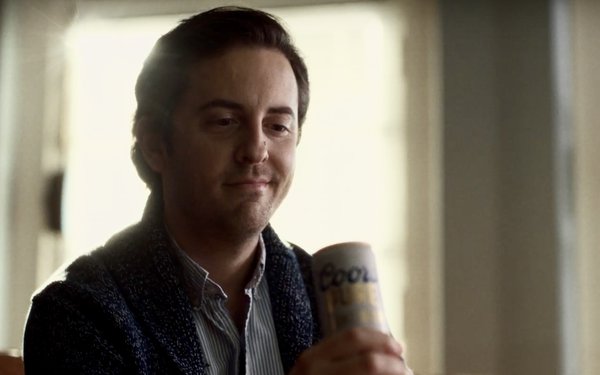 In one ad, as a woman pops open a can in her kitchen, the can says, “Hey Jessica, you did great today.”

“More of a walk/run” Jessica confesses.

“Mostly to get away from your kids -- but you also chose an organic beer.”

The voice of the can is comedian Ali Wong, who,  in another ad,  congratulates Matt for taking a bike ride and buying a standing desk.

“Matt, you’re amazing,” she tells him.

He responds, self-consciously, “Thanks. That means a lot, coming from a beer.”

Coors Pure joins Michelob Ultra Pure Gold Organic, launched in 2018, which lays claim to being the first nationally distributed beer deemed organic by the USDA. So is Coors Pure. There are other organic beers among smaller labels, so the whole concept isn’t very new.

But as the big beer brands strive to attract the health and wellness crowd, organic seems one way to do so. Pure has 92 calories and 3.5 carbs, so that’s health-conscious. But those stats are not even mentioned in the ads, because they wouldn’t mean that much to people like Jessica, who sort of jogged, or Matt, who kind of cycled and bought a standing desk because, as he says in the ad, “Sitting desks are bad now.”

So Pure is a good beer for people who just bend their elbows at the bar every once in a while.  The Coors Pure tag is, “It’s organic -- but chill about it.”

Indeed, the campaign is titled, “Because You Tried Today,” which thematically takes it far away from very sweaty gyms and instead makes it seem that Coors Pure might someday offer its drinkers a participation trophy.

The ads, from Droga5, roll out with a heavy dose of digital platforms, including podcasts and streamers like Hulu and Peacock. On TV, Coors Pure has ads slotted for the Adult Swim programming segment of the Cartoon Network, “The Tonight Show with Jimmy Fallon” and the “Late Show with Stephen Colbert.”

It seems unusual for a beer brand (but kind of  logical for Coors Pure), that it isn’t slotting any ad buys on sports networks, but is instead favoring ad venues that reach people “who are more interested in wellness/fitness," according to a spokeswoman for the brand.

Or, based on the commercials, people who  try to be interested. And that’s OK too.