Jean Smart Is The Queen Of Comedy In 'Hacks' 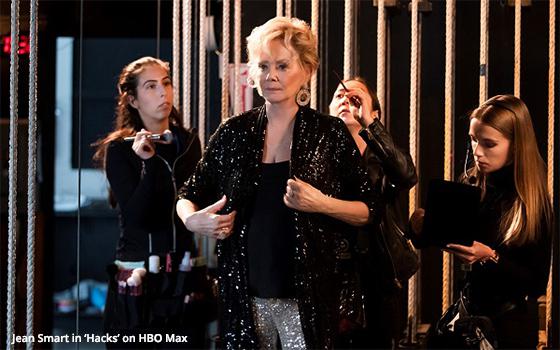 Jean Smart turns in yet another bravura TV performance, this time as an aging queen of comedy in the new HBO Max comedy “Hacks,” which starts streaming this week.

Thanks to Smart, “Hacks” is the best new comedy of the year so far -- smart, literate and hilarious. Smart, 69, plays Deborah Vance, the most legendary female stand-up in America, an A-list marquee name who has been a star entertainer in Las Vegas for decades.

The unmarried Vance lives a life of splendor in a Vegas mansion, where she is surrounded by house servants and business associates who manage every detail of her life.

She performs in the evenings, takes meetings during the day and occasionally flies out of Vegas to appear on a home-shopping channel where her self-branded housewares are routine sellouts.

She is caustic, fierce, unfiltered and highly protective of her turf. If these descriptions of Deborah Vance remind anyone of Joan Rivers, then the resemblances between the two are likely intentional.

While various aspects of Deborah Vance’s life differ from Rivers,' it is abundantly clear that the life and career of Joan Rivers served, at the very least, as an inspiration for the Vance character.

Whatever Jean Smart did to prepare herself for the role, she nails it. Her performance is one of the best we will likely see on TV all year.

The title of the show, “Hacks,” is a word often used to deride second-rate comedians, and also second-rate writers generally (i.e., not only writers of comedy). Since Deborah Vance is not a second-rater, it is not entirely clear what the title is supposed to signify or who it is supposed to refer to.

It is possible that it is supposed to refer to a class of comedy writers represented at the outset of the series by a young woman named Ava, played by Hannah Einbinder, who emerges as the closest thing Smart gets to a co-star in this show.

As the series opens, the owner of the casino in which Deborah has been a long-time staple informs her he is cutting back her performance dates in an effort to draw a new generation of younger patrons to his casino.

As a result, Deborah’s manager suggests that she hire a younger writer in order to freshen up her act.

The manager then connects her with Ava, who is desperate and unemployed. Still in her 20s, her once-promising career had barely gotten off the ground when it suddenly ground to a halt after she was attacked for some tweets she posted some years previously.

“Hacks” appears to be the story of this relationship and how it will evolve over time. Watching that happen figures to be one of the great pleasures of television of 2021.

“Hacks” starts streaming on HBO Max on Thursday (May 13).