Hollywood Is Shocked, Shocked! About The Golden Globes 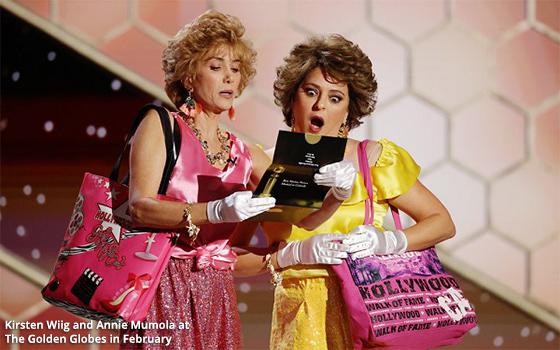 Suddenly, the legitimacy of the Golden Globe Awards is being called into question, although the various flaws, defects and idiosyncrasies inherent in the awards’ “governing” body -- the Hollywood Foreign Press Association -- have been known to one and all for years.

However, having said that, the issue that is causing the most consternation now is the apparent racial makeup of the HFPA’s membership.

According to the Los Angeles Times, the group has no blacks among its 87 voting members. Or to put it another way, no black members = no diversity.

To many in Hollywood, this fact is coming as a shock, and the industry has reacted by stormily issuing statements all over the place that they will not do business with the HFPA until this diversity deficit is fixed.

Among others, NBC is making headlines for its announcement this week that it will not air the Golden Globes next winter because the network doubts that the reforms the HFPA promises to implement will be sufficiently in place by then.

“We continue to believe that the HFPA is committed to meaningful reform,” said an NBC statement issued on Monday about the group with whom NBC has been partnered since at least 1996.

“However, change of this magnitude takes time and work, and we feel strongly that the HFPA needs time to do it right,” NBC’s statement continued. “As such, NBC will not air the 2022 Golden Globes. Assuming the organization executes on its plan, we are hopeful we will be in a position to air the show in January 2023.”

Let the record show that the Golden Globe Awards that aired on NBC last February drew a total audience of just 6.91 million viewers -- a 62% decline from a year earlier. So maybe NBC is tired of the Golden Globes for reasons other than diversity.

The HFPA’s diversity deficit, while shocking to some, was not as shocking to the TV Blog as the realization that the HFPA has only 87 voting members. By contrast, the Academy of Motion Picture Arts & Sciences has something like 7,000 members who vote for the Oscars.

The L.A. Times’ report on the lack of diversity among the HFPA’s membership was apparently published earlier this year around the time that this year’s awards were held, and seen on NBC, on February 28.

According to various reports in the trade press this week, the L.A. Times’ investigation also found evidence of corruption in the voting process for the Golden Globes, with allegations that the studios -- as well as outside publicists -- had long “promoted” the stars and movies they represented by wining and dining the HFPA’s members and bestowing them with gifts, which some might conclude sounds like bribery.

But Hollywood’s reaction to this news smacks of Capt. Renault’s famous line in “Casablanca” when he declares how “shocked, shocked” he is to find out there’s gambling going on in Rick’s Café -- something he knew all along.

Yesterday I searched back in my personal archives to find a story I wrote about a very eye-opening investigative documentary that came out 18 years ago in 2003.

Called “The Golden Globes: Hollywood’s Dirty Little Secret” and directed by Vikram Jayanti, it aired on a now-defunct cable channel called Trio, which was then owned by NBC.

Except for the racial makeup of the HFPA membership, this documentary had everything else. “In a nutshell,” I wrote then, in December 2003, “the film points out what many in Hollywood already know: that the vast majority of HFPA members are star-struck hangers-on whose votes can be bought with free buffets and bottles of champagne. Most of them have never written a single word of film criticism and have never seen the movies up for awards.”

Meanwhile, on the subject of the HFPA’s diversity, yesterday I went on the NBC press site to look at the photos the network posted there from last February’s Golden Globes and found plenty of diversity among the honorees and presenters seen there -- black, white, Asian, gay, straight, young, old, skinny and full-figured.

The show, if not the HFPA membership, seemed to cover all the bases.