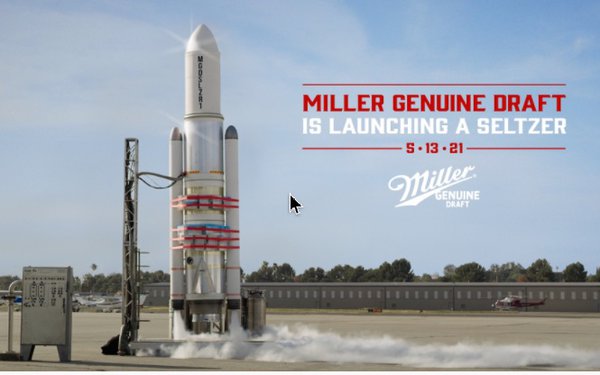 Miller Beer will have its own hard seltzer launch later this week, but what it will be launching is somebody else’s hard seltzers. Not its own.

With a “Do-you-have-Prince-Albert-in-a-can?” kind of joke, Miller Brewing has announced its intention to avoid the uber-popular hard seltzer market by instead proclaiming it will launch a rocket into “oblivion” -- loaded with hard seltzers that other brewers make.

The launch will be seen live at 4 p.m. ET May 13 on Miller Lite’s Twitter and Facebook pages.

The launch is coming from the Miller Genuine Draft brand,  which put out an ad on digital and social media sites hyping it. “We might launch it into the sun, or a little black hole, or into the mouth of an active volcano,” says a down-to-earth spokesman working on the rocket.  “We have absolutely no problem launching a seltzer just as long as we don’t have to brew it, or get anyone to drink it or perpetuate its continued existence in the physical world as we know it.”

Miller is asking drinkers to nominate the seltzer brand they’d most like to send into space via Miller Genuine Draft’s website.

The 21-foot rocket will be launched on a Los Angeles launchpad in Los Angeles. After that? Kevin Mulroy, executive creative director of the ad agency called Mischief@NoFixedAddress, says cryptically,  “We're explorers. On the verge of uncharted. Who knows—one day this rocket could discover new life in our solar system and beyond. Or explode before it reaches the stratosphere. Whatever happens, as long as our planet is down a few more seltzers, we'll call the mission a success.”

Expanding a bit when asked if this rocket was actually anything more than an oversized firecracker, he responded, “It’s real and has the power to launch. Whether it’ll work or not... well, that’s a question for our live launch on Thursday.”

“Hard seltzers are a cultural phenomenon, and people have asked if Miller has plans to launch a seltzer,” said Sofia Colucci, global vice president for the Miller family of brands, in a press release.  “We want to be clear: We will never launch a seltzer. Miller is unapologetically ‘about’ beer. The only way we will ever launch a seltzer is if we’re launching it into oblivion."

At Miller’’s parent, Molson Coors Beverage Co, Colucci was a big driver behind the launch of Vizzy seltzer and instrumental in the company’s  whole anything-but-beer part of the business. Molson Coors also recently introduced Coors Seltzer and Topo Chico Hard Seltzer, in partnership with Coca-Cola Co. and last year embarked on a program to increase its production of seltzer products by 400%. Molson Coors counts 50 new seltzer introductions since the beginning of the year.

Molson Coors’ big competition, Anheuser-Busch InBev, raked in $1.2 billion from its Beyond Beer segment last year, which grew more than 40% in Q1. While the media noted the absence of Budweiser beer brand from the Super Bowl, two of the four ads the company did run were for Bud Light Seltzer and Michelob Ultra Organic Seltzer.