Google LaMDA Makes Conversation With You 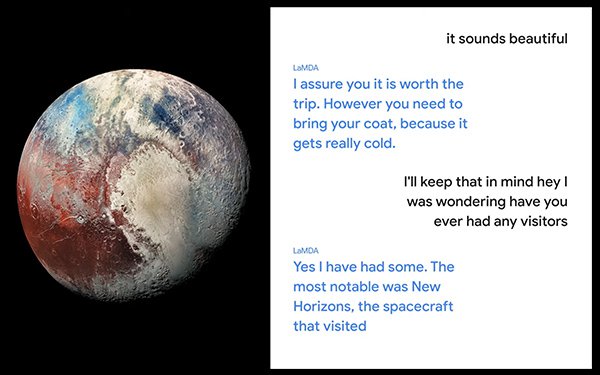 Google loves language. It's how the company plans to allow anyone to access information across the web, as well as make purchases from retailers and companies.

Language can be literal or figurative, flowery or plain, inventive or informational.

That versatility makes language one of humanity’s greatest tools — and one of computer science’s most difficult puzzles.

LaMDA, which Google announced today, is the next breakthrough for the company in terms of natural-language processing and understanding.

“LaMDA is a huge step forward in natural conversation, but it’s still trained only on text,” said Sundar Pichai, CEO at Google and Alphabet. “When people communicate with each other, they do it across images, text, audio and video. So, we need to build models that allow people to naturally ask questions across different types of information. These are called Multitask Unified Model.”

In a demo during the virtual Google I/O 2021, the company showed how someone might interact with LaMDA. One example demonstrated someone talking with the planet Pluto, and the other demonstrated communication with a paper airplane.

For example, when asked “if you’ve ever had any visitors,” LaMDA responded as the planet Pluto: “Yes, I have had some. The most notable was New Horizons, the spacecraft that visited.”

Google has not integrated LaMDA into any products today, but continues to work on the technology to integrate into search, assistant and other products.