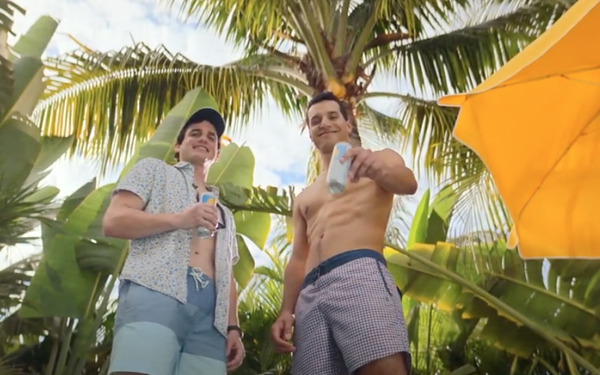 It's the first work for the vodka-based beverage from Austin-based independent agency Preacher, which was chosen as the brand’s first AOR in July.

“While the media target is focused on younger millennials who are leading consumption in the category, we definitely embrace fans across generations and geographies, a lot of whom are looking to step up their hard seltzer choice,” Lieb tells Marketing Daily.

A 60-second anthem spot is viewable online with three 15-second cutdowns running on national TV. They feature attractive millennials having fun at a pool party, BBQ and on a boat.

The voiceover features  benedictions from the older and wiser liquor store clerk/mentor, including: “May your day be sunny. May you wake up before your alarm goes off, all 12 of them. May everyone respond to your group text, even Derek, who never has his phone with him... May you have a cooler full of hard seltzer.... May that hard seltzer by High Noon. May you live like the sun’s always out, and may the most stellar of days shine upon you.”

The campaign introduces a new tagline, “Sun’s Up,” replacing “Things Just Got Real," which the brand used in the last TV campaign, which broke in August 2019 and continued to run last year.

The spots were directed by Rachel McDonald of Biscuit Filmworks, who has created campaigns for Facebook, Microsoft and Ikea, and got her start in features working for noted directors like Clint Eastwood and Nancy Meyers. Stills were created by Emiliano Granado, who’s worked with brands like Nike, Reebok, Adidas and Smirnoff.

Like others in the category, the product has enjoyed success since its launch in 2019.