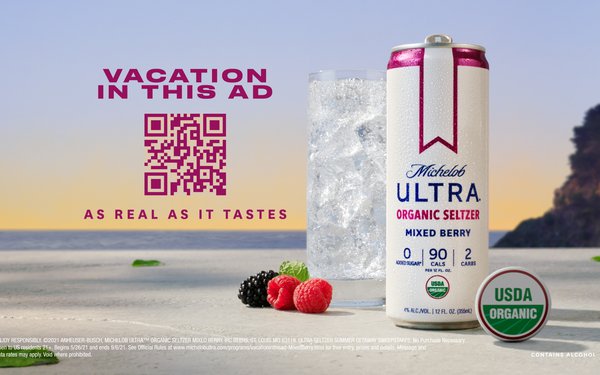 Michelob Ultra Organic Seltzer will get real this summer by offering travel-starved Americans the chance to win “fruitful” vacations themed to its citrus, mixed berry and mango apricot flavors.

Using such lines as “Vacation In This Ad,” “Real Surfing Beats Web Surfing,” and “As Real as it Tastes,” the Anheuser-Busch brand’s sweepstakes and ad campaign kicks off May 26 and will run through Labor Day.

With creative by FCB and media buying by Dentsu, the campaign is designed to reach 34.5 million consumers weekly.

TV spots will run during major golf tournaments like The US Open and Tour Championship, as well on more than 15 cable TV networks. Other media will include Facebook/Instagram, Twitter, YouTube, Hulu, and programmatic buys. Locally, the campaign will use out-of-home in 14 major markets.

"We  spent last summer sharing virtual hugs through digital screens and live streaming events from our living rooms,” said Ricardo Marques, vice president of marketing, Michelob Ultra. “Now, with the nation starting to reopen and travel picking back up, the prospect of enjoying a real summer is within reach."

Ads -- including video -- invite consumers to take a photo of a QR code, which will route them to a website where they'll be entered to win a vacation for four.

The three prize trips each feature a special activity. For example,  in "Mixed Berry Meets the Berry Islands," winners take a private boat charter in The Bahamas. For "Mango Magic Hour in Hawaii," vacationers stay at a beachside resort and receive a private mango-infused luau and jam session with a live band.

The brand noted that its "Vacation in this Ad" campaign is part of Anheuser-Busch's "Let's Grab A Beer" initiative announced last month. “Now, “As we are hopeful for brighter days ahead,” Marcel Marcondes, chief marketing officer, Anheuser-Busch, said at the time, “We’re …pivoting our plans to ensure our brands are there to encourage people to think about being together again and returning to activities we love, while reminding them to socialize safely and responsibly.”