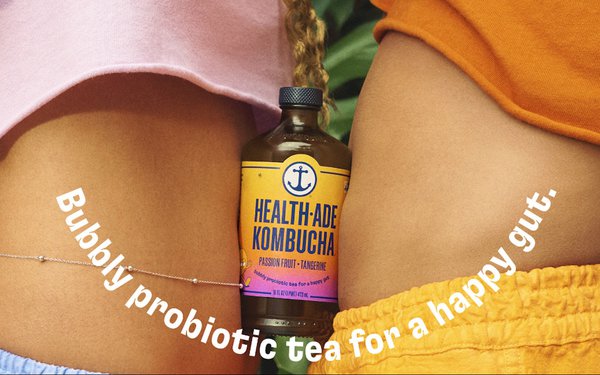 Kombucha beverage pioneer Health-Ade’s biggest advertising campaign to date is an attempt to break through the “sameness” of ubiquitous health and wellness claims while educating people about gut health.

This ad from the Sister Studio agency does just that, putting a spotlight on male and female bellies interspersed with animated visuals of the bacteria and fungi that populate the digestive tract.

“There’s a whole world that lives in your belly. It’s as unique as your fingerprint. It drives every part of you,” says the voiceover.

Health-Ade was an early entry to the probiotic-rich kombucha scene in 2012 with its fermented teas. Since then, myriad brands have entered the health and wellness space -- but the kombucha category hasn’t done enough to differentiate itself, according to Health-Ade CEO and co-founder Daina Trout.

“People are getting a lot of ads, they’re seeing a lot of pictures -- and it’s always a pretty face with a bottle. We were doing that, too, but we don’t like it now that everybody’s doing it,” Trout tells Marketing Daily.

Showcasing stomachs in the creative offers “a new vantage point that when you see a product might make you think twice.”

People who click on Health-Ade ads placed on digital platforms -- the brand does not use television -- will find a section of the company’s website called Gut Health 101. It’s a compendium of scientific information about the function of prebiotics and probiotics.

Next month will bring the debut of an updated version of Health-Ade’s prebiotic soda known as Health-Ade Booch Pop, which has been renamed Health-Ade Pop.