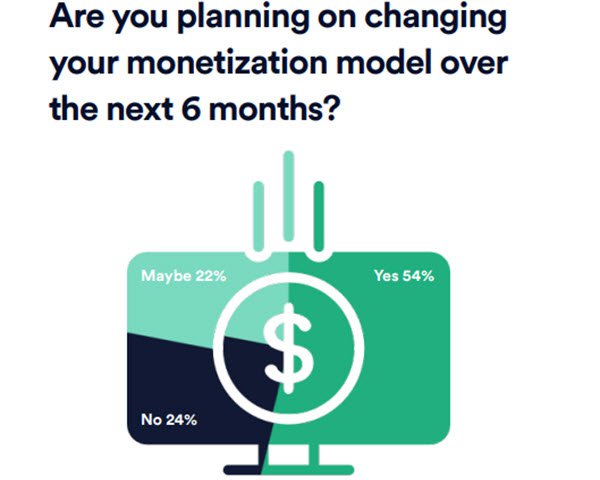 While we can count on every move made by Netflix, Amazon Prime Video, Disney+, Hulu, Peacock and the other streaming services from the major entertainment players being dissected on a daily basis, we don’t hear nearly as much about the rest of the streaming market.

Yet, there are hundreds of streaming services worldwide, including at least 300 in the U.S., according to Parks & Associates.

A survey by Applicaster of 95 decision-makers involved in building streaming video apps at broadcasters (52% of the sample), D2C video brands (27%), multichannel aggregators (20%) and video game developers (1%) offers some directional insights on these other players’ plans and business models.

For context: Applicaster offers a platform designed to help broadcasters, content publishers and OTT providers create, distribute, and manage multimedia applications across multiple mobile and TV devices. Its clients are broadcast, sports and kids video providers, including Viacom and Disney.

Asked if they were seeing OTT ad-fill rates return to pre-pandemic levels, 70% of those that take ads reported that was happening with mobile in early 2021, versus only 56% saying the same about TV.

The responses confirmed that a mobile-only strategy (the one initially used by the now-defunct Quibi) won’t cut it anymore. Brands that hope to monetize the tide of streaming growth have to be everywhere their viewers are, and adding new platforms is the most efficient way to add significant volumes of users to increase ad revenue and/or subscriptions, as the report notes.

So while two-thirds of participants cited mobile as a top monetization platform for this year’s first half, 53% cited smart TVs, 44% gaming consoles, 42% boxes/sticks and 40% the web.

The services reported using an eclectic mix of business models. Most use both AVOD and SVOD, combined with other revenue streams as well.

More than two-thirds (67%) use AVOD. But of those, just 19% rely solely on advertising. The other 81% combine ads with other strategies.

Of the 58% who use SVOD, only 22% rely only on subscriptions, with 78% also using other revenue streams.

Of those who take advertising, more than a quarter (27%) report using sponsorships and product placement.

Everywhere authentication is popular with U.S. cable brands, most of which use a matrix of monetization formats to serve cable viewers and reach the growing audience who have cut the cord.

All in all, the participants reported 19 different combinations of revenue tools being used across platforms.

Consumers’ evolving habits and learning based on their use of specific apps is driving continual honing of streaming apps.

More than half (54%) said they were planning to change their monetization models within the next six months, and another 22% said they might do so.

Here’s the breakdown on what models respondents are considering in the next six months: 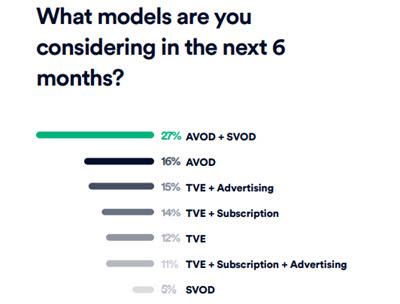 Nearly half (46%) say they are managing new subs for mobile and TV platforms via in-app signups that require revenue-sharing (generally 30%) with app stores, versus just 20% relying only on websites in order to avoid the app-store cut.

Another 23% are still trying to figure out how to manage subscriptions without having to revenue-share with the app stores, while 11% don’t plan to offer subs.

Nearly a third (27%) reported considering a combined AVOD-SVOD model over the next six months.