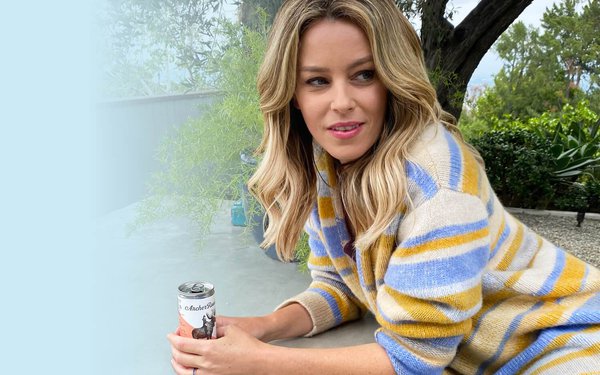 Actor/director Elizabeth Banks has made a “major” investment in seven-year-old canned wine company Archer Roose, and is now its co-owner, chief creative officer -- and spokesperson.

The first ad featuring Banks, from Boston agency Colossus, broke May 28 in :60 and :15 versions. The campaign will be running on Roku's OneView Ad Platform and paid social media, as well as on relevant Twitter feeds. Dragon360 is the media agency.

The humorous commercials co-star another Archer Roose co-owner, its co-founder and CEO Marian Leitner-Waldman. In the one-minute version, she finds Banks in her house when she gets home from work. Leitner-Waldman says that she doesn’t need a celebrity beverage endorser: “That’s so cliché. But she just told me that she works here now. Next thing I know, she owns half the company!”

The theme is reinforced on Archer Roose’s web site, where Banks is identified as an “uninvited guest.”

"To me, wine is another form of storytelling," explained Banks in Archer Roose’s announcement of the new partnership. "I have always loved wine but wanted to make it more accessible and build a brand that would resonate with women…. I thought about my own life and all the incredible shared moments with family and friends -- a beach day, a ski trip -- and how it would be great to pull a sauvignon blanc out of a cooler for a change."

Leitner-Waldman told Marketing Daily she couldn’t divulge the amount of Banks’ investment or exact ownership percentage at this time.

The canned wine market, like other non-beer canned alcoholic beverages, has been booming in recent years. A report from Grand View Research valued the global canned wine market at $211.4 million in 2020, and projected a compound annual growth rate of 13.2% through 2028.